Australia Joins US’ Anti-Iran Persian Gulf Coalition, Says it ‘Will Be Limited in Scope’ 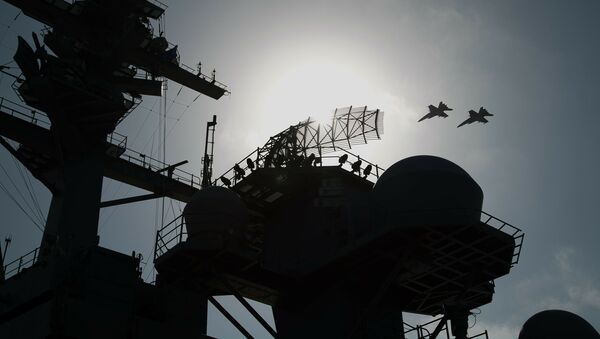 Oleg Burunov
All materialsWrite to the author
The move comes a week after Iranian President Hassan Rouhani reiterated his rejection of US plans to create a maritime coalition in the Persian Gulf, saying that the nations of the region are able to safeguard regional security all by themselves.

Australian Prime Minister Scott Morrison has signalled his country’s readiness to join the US’ anti-Iran maritime coalition in the Persian Gulf.

In an apparent nod to Iran, he told reporters on Wednesday that “this destabilising behaviour is a threat to Australia's interests in the region.”

“The government has decided that it is in Australia's national interest to work with our international partners to contribute. Our contribution will be limited in scope and it will be time-bound,” Morrison pointed out.

The statement comes after Iranian President Hassan Rouhani reiterated last week that he rejects Washington’s plans to create a naval coalition against Tehran in the Persian Gulf and that “there is no need to attract foreign forces in order to maintain security” in the region.

He also indicated Iran’s willingness to “ensure the security of this region together with its coastal states, just as it has been done in the past”.

The remarks followed UK Defence Minister Ben Wallace’s announcement last week that London would join a US-led maritime mission in the Persian Gulf, in what was described by Secretary of State Mike Pompeo as a “victory for meaningful, effective multi-lateralism”.

Up until now, the UK had remained the US’ only ally to say “yes” to Washington’s proposal to join the Persian Gulf mission. Earlier, similar requests were sent by the US to France, Japan, Norway, Belgium and South Korea, with their governments’ go-ahead yet to be announced.

Last month, the US floated the idea of creating a maritime coalition to patrol the Persian Gulf in order to “ensure the freedom of navigation” in the area.

The proposal followed the seizure of the UK-flagged oil tanker Stena Impero by Iran’s Islamic Guard Corps (IRGC) Navy in the Gulf over its alleged violation of maritime rules on 19 July. This was preceded by the detention of the Iranian tanker Grace 1 near the Strait of Gibraltar over an alleged breach of EU sanctions. The Iranian Foreign Ministry slammed the incident as an act of “pure piracy”, saying that it “sets a dangerous precedent”. The Grace 1 was released last week in a move approved by Gibraltar authorities.

Tensions in the Persian Gulf have been growing since the US sent its aircraft carrier strike group and additional troops to the area in May in a “direct message” to Iran. The Islamic Republic earlier announced its partial suspension of its obligations under the 2015 Iran nuclear deal, also known as the Joint Comprehensive Plan of Action (JCPOA), exactly a year after Washington’s unilateral exit from the agreement.