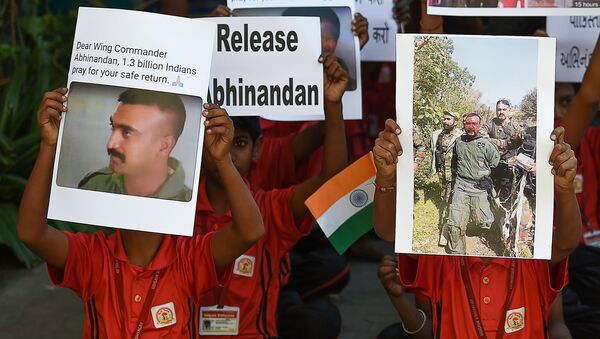 New Delhi (Sputnik) - Veena, known for her anti-India rants, on Tuesday posted two photographs of Wing Commander Abhinandan before being captured and after with bruises attained while in Pakistan's custody.

A Twitterstorm erupted as Pakistan’s controversial actress Veena Malik mocked Indian pilot Abhinandan Varthaman, who was captured by the Pakistan forces during the India-Pakistan dogfight earlier in February.

A lot of Indians said they were proud of the bravery and gumption displayed by the fighter pilot while in Pakistani custody. He was released in less than three days.

​Some livid netizens also trolled the actress, reminding her of her rumoured love affair with Indian actor Ashmit Patel during a stint in the reality show Big Boss.

The actress is known to have landed in hot water and invite trouble with her controversial acts and rants.

Veena Malik, who had a brief stint in the Indian film industry, has been in the news for her nude photographs and controversial statements.

In one such incident, she was even-handed a 26-year jail term by a Pakistani anti-terrorism court for ‘malicious acts’ of blasphemy, after appearing in a wedding scene, on a daytime broadcast by Geo TV depicting the marriage of the Prophet Mohamed’s daughter.
The programme had sparked a wave of controversy in the Islamic country when it was aired in May 2014.

Wing Commander Abhinandan was taken into custody by Pakistani forces on 27 February after his MiG-21 was shot down in fierce aerial combat over Pakistan-administered Kashmir.

The pilot had reportedly also shot down a Pakistani F-16 fighter jet in the process. He was released after 60 hours of detention in Pakistan.

The 27 February dogfight followed a buildup from the 14 February Pulwama terror attack allegedly carried out by the Pakistan-based Jaish-e-Mohammad (JeM) in which more than 40 Indian soldiers had died. India responded with airstrikes against alleged JeM terror camps on Pakistani soil on 26 February.