Lucky Escape: Daredevil Moose Jumps off Cliff and Then Swims Away Unbothered 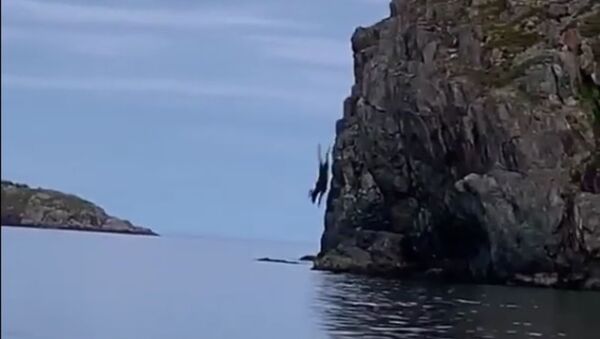 A woman on a fishing trip with her fiancee in Canada was able to record the extraordinary moment a moose jumped off a cliff in what appears to be either an accident or a desperate bid for freedom.

The video taken by Alyssa Hewlett during a fishing trip with her fiancee in Nippers Harbour in Newfoundland, Canada caught the bizarre moment a moose jumped off the edge of a cliff.

It is not clear whether the animal lost its footing or simply had no other way to get down from the bumpy cliff apart from taking a chance and diving into the water.

Luckily for the moose, the animal managed to survive the jump and came up to the surface of the water seemingly uninjured and calm.

“I am rooting for you buddy” – said one of the onlookers with a sigh of relief.

"The moose probably walked down the cliff-side but could not get back up.” – Moen suggested in a comment to Mashable. “Given how calm the water was it could have found an access point to get back on land.”

Twitter users were astonished by the stamina and boldness of the animal, finding it “shocking”.

Something you don’t see unless running from a predator. https://t.co/na92P1sLF6

Daredevil moose dives off a cliff, swims away like nothing happened

It's always whiplash-inducing when you see an animal in a place it's not meant to be. Cats on roofs, bears in cars, etc. But I guarantee you that one of the most shocking is watching t… https://t.co/5YyAgDPlDc pic.twitter.com/4r7YT9mwqF

The moose is the largest species in the deer family, with most of the world's moose population currently residing within Canada, Russia and the Baltic states.