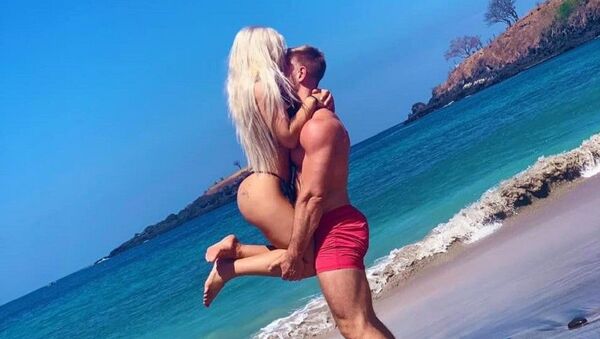 © Photo : Facebook / Zdenek Slouka
Subscribe
The couple were accused of “harassing” Pura Beji, a Bali temple located in a sacred forest. Pura Beji, one of three such temples in the area, is used for Hindu cleansing rituals.

A pair of Instagram influencers were forced to apologise to Indonesians after their shenanigans at a holy Hindu temple sparked public outrage.

Fitness coaches Sabina Dolezalova and Zdenek Slouka, from the Czech Republic, filmed themselves having fun in the Ubud Monkey Forest, a popular natural reserve and temple complex in Bali.

The forest is home to three Hindu temples, which are all believed to date back to the 14th century. The Czech Instagram stars paid a visit to the Pura Beji temple, which is used for spiritual cleansing rituals.

In an Instagram story posted by Sabina, she was filmed bending over and lifting up her skirt so that her boyfriend could splash her seemingly bare buttocks with water flowing from the spout at one of the temples.

Both are seen giggling for the camera.

The couple, who share a total of 85,000 followers across their Instagram accounts, found themselves at the centre of a scandal after Arya Wedakarna, a Balinese senator, shared the video of their antics on Instagram on Monday.

He accused Sabina and Zdenek of “harassing” the temple, while other users called on the government to ban them from visiting Indonesia for what they called an “insulting” and “disgusting” act.

Following the backlash, the two issued a an apology video on Tuesday. Zdenek said: “We are so sorry about the video from yesterday.”

Sabina continued: “We really didn't want to do anything bad, we are so truly sorry. We hope you are going to forgive us and now we are just finding what we can do to fix it.”

Her manager Daniel Simkovic told Czech media that they would like to make a donation to local villagers to express their regret.

“A voluntary contribution was proposed to the local village. Whatever amount Sabina and her friends give, it is up to them and purely voluntary,” he was quoted as saying.