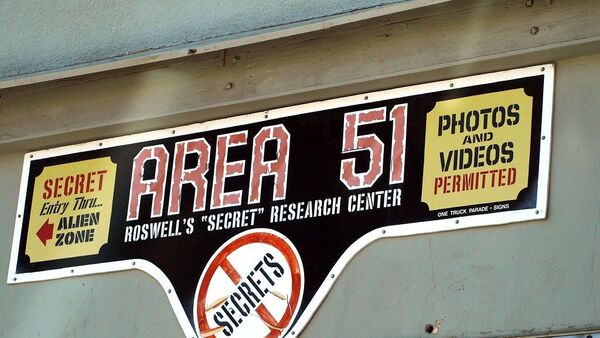 One of the most popular events on the internet of late has been blocked and then reinstated in what Facebook called a mistake. The people behind the idea say the corporation resorted to decades-old oppression methods.

Matty Roberts, the man who started the viral 'Storm Area 51' Facebook event, has expressed disappointment with the platform's efforts to snub him and his flash mob.

His event that is playfully encouraging people to "storm" the top-secret facility and "see them aliens" was removed from the social network over the weekend for violating unspecified "community standards".

The company acknowledged their "mistake", and the page is available again, much to the delight of some 2 million alien enthusiasts who indicated (some in jest and some not) that they plan to attend.

But Roberts claimed that he also was unable to create two other sister events after Facebook took down the original page. "The final two takedowns had no reason given for their deletion—no notification that they'd been deleted—they just disappeared," Roberts told Newsweek magazine, saying it "spooked me out".

The Air Force has discouraged would-be raiders from showing up on 20 September, saying the military "stands ready to protect America and its assets".

Roberts' event collaborator, the contemporary artist and filmmaker Jeremy Corbell, said the event will still go down on 20 September whether "the military or Facebook like it or not".

"People are going to the desert on 20 September and likely in staggering numbers," he was quoted as saying. "By removing the Facebook event, they are not deterring people from going; they are simply blocking the needed lines of communication that we have with the public to provide direction and safety."

"If humour is against Facebook 'community standards,' I'm not sure what we have become as a digital nation," he continued. "More importantly, I see this as an attempt to censor over 3.7 million people. It's an attempt to digitally water-canon the populous into dispersement [sic] and silence, a control method used in the riots of 1969 fifty years ago."

UPDATE @Facebook made a good choice after pressure from YOU & national media. Your voices were heard & they reinstated the original 3.5M Facebook Event page for the ‘STORM’ Area 51 events on Sep 20th. Almost time to reveal the peaceful plans; stay tuned!#abobLazar#StormArea51

Roberts and Corbell say those who will show up should not expect to break into the base and are instead planning to organise a music and arts festival, with extraterrestrial specialists also in attendance.

Area 51 is a highly-classified US Air Force facility located in the Nevada desert over 100 kilometres from Las Vegas. The base is believed to be a test site for secret US aircraft and aviation technologies, but it is mainly associated with alien conspiracies claiming that this is where the government is keeping or studying recovered spacecraft or even aliens themselves.