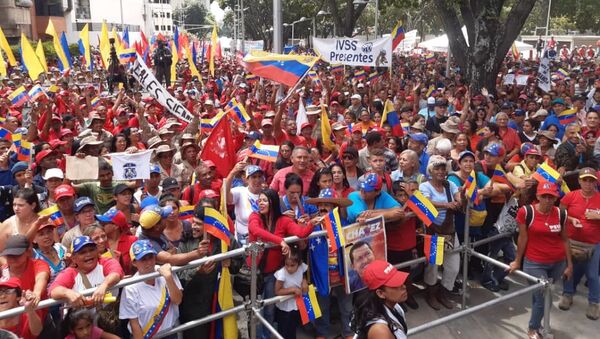 Thousands of supporters of Venezuelan President Nicolas Maduro took to the streets in Caracas on Wednesday, denouncing Washington's decision to block all financial assets of the Venezuelan government in the United States.

The protesters dressed in red and waving the flags with the tricolour of Venezuela, gathered in the centre of the Venezuelan capital.

"Yankee Go Home", "Hands Off Venezuela", was written on the posters the protesters were holding.

Earlier, Nicolas Maduro expressed hope that Caracas would be able to relaunch dialogue with Washington and build a new type of relations with the United States.

Venezuela has been in a state of deep political crisis, which took another turn in  January after the US-backed opposition leader, Juan Guaido, illegally proclaimed himself interim president. The United States, as well as the European Union, imposed sanctions on Venezuela and froze its assets. Russia, China, Cuba, Bolivia, Turkey and a number of other countries stressed that they recognize constitutionally-elected Maduro as the only legitimate president of Venezuela, calling for dialogue. Maduro called Guaido a US puppet and accused Washington of orchestrating a change of government in order to claim Venezuelan natural resources.