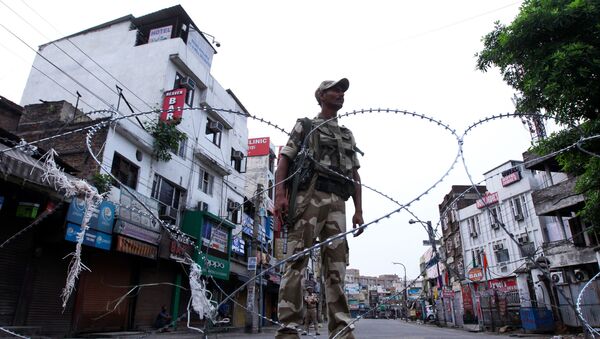 New Delhi (Sputnik): Restrictions have reportedly been tightened in India's Kashmir Valley following the revocation of Article 370 of the country’s constitution that accorded special status to Jammu and Kashmir.

Indian daily, The Tribune, said a telecommunications blackout in force since Monday 5 August remained in place on Wednesday, with local authorities cutting off cable, telephone and internet links across the region to prevent people from taking to the streets to protest the government’s move to change the status of Kashmir.

Last month, according to an India Today report, the government told parliament that the security situation in Jammu and Kashmir state had improved during the first half of the year.

But based on intelligence inputs about infiltration from the Pakistani side, the Indian government decided to deploy additional troops, especially in sensitive areas of the region.

A report in the Economic Times said the process for revoking Article 370 began in the third week of June before the beginning of the Budget Session of Parliament.  India’s Home Minister Amit Shah then reviewed the security situation in Kashmir with National Security Advisor Ajit Doval.

Former bureaucrat-turned-politician Shah Faesal took to social media to say there was no shortage of food or essentials. He also said that military officers have been given satellite phones to coordinate the delivery of civil supplies.

​The Kashmir Valley is set to observe the Islamic festival of Eid-al-Adha from 11-15 August. But some residents said they are in no mood to celebrate.

Retailers are complaining about their businesses taking a hit because of the lockdown. Some feared they wouldn’t be seeing many customers visiting their shops during Eid.

Some apple growers said some of their trucks carrying fruit boxes are stuck at various checkpoints, as security personnel are not allowing vehicles to move on the main highway.

Several roads have been barricaded with barbed wire. Checkpoints are being patrolled with police and armed paramilitary personnel.

Kashmir has been a contentious issue between India and Pakistan since both countries gained independence from Great Britain in 1947. Both claim the region in full while controlling parts of it.