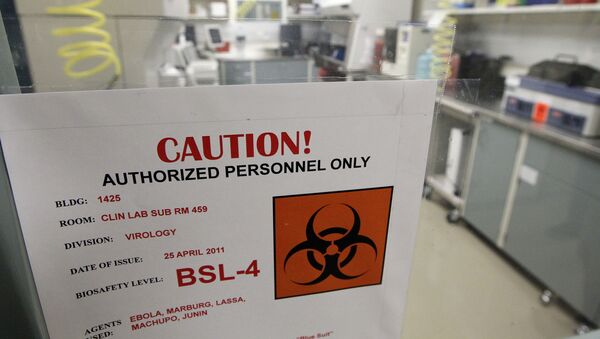 The suspension order was apparently issued to the Fort Detrick facility due to problems in the new waste water decontamination system that were reported by a CDC inspection.

The US Army Medical Command facility known as Fort Detrick, which used to be the center of the now-defunct US biological weapons program, has been stripped of its license to conduct research of deadly pathogens such as Ebola, smallpox and anthrax, at the behest of the Centers for Disease Control and Prevention (CDC), the Independent reports.

According to the newspaper, CDC made this move after an inspection of the facility yielded a number of problems related to the new chemical-based waste water decontamination system which the base has been employing since the steam sterilization plant they used before was damaged during a storm last year.

While the US bioweapon program was officially shut down in 1969, “defensive research” into certain deadly pathogens was still conducted at Fort Detrick.

A spokeswoman for the lab named Caree Vander Linden, however, said that there haven’t been any leaks of hazardous materials or threat to public health, despite the suspension order, the newspaper adds.