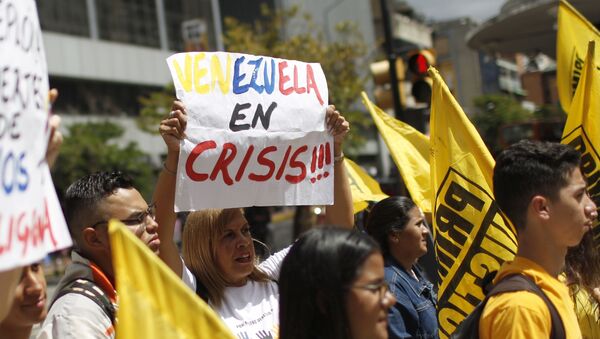 On Tuesday, the US instigated what effectively amounts to a total embargo against Venezuela in its latest bid to force Venezuelan President Nicolas Maduro from power. A journalist told Sputnik the measure would lead to “the absolute strangulation, asphyxiation of what’s left of Venezuela’s economy.”

"We cannot use the financial mechanisms of the international banking system currently, we are totally blocked,” Venezuelan Foreign Minister Jorge Arreaza lamented on Twitter Wednesday. “There is no way to buy medicines or anything."

#LIVE | #Venezuela's Foreign Minister @jaarreaza: "We cannot use the financial mechanisms of the international banking system currently, we are totally blocked. There is no way to buy medicines or anything."#HandsOffVenezuela #TrumpUnblockVenezuela pic.twitter.com/WZHmlDQwI5

​The move sees Venezuela join the ranks of Cuba, Syria, Iran and the Democratic People’s Republic of Korea as the only countries against which the US has such stringent trade restrictions. However, as with all of those countries, both Russia and China continue to trade with Venezuela in a snub to US designs.

Since January 23, the US has sought the ouster of the democratically elected Maduro and his replacement with Juan Guaido, a political neophyte in the country’s right-wing opposition with ties to US intelligence. Since then, Guaido has staged three attempted coups d’etat, all of which fizzled, and Washington has hit the country hard with wave after wave of economic and political sanctions. Other measures have included the Bank of England’s seizure of $2.3 billion in Venezuelan state gold in its accounts, the US’ seizure of profit from state-owned oil company Citgo’s US holdings and their redirection to Guaido, and an attempt to hamstring the Local Provision and Production Committees (CLAPs), a state network that distributes subsidized food necessities to millions of poor Venezuelan families.

“I can tell the people of the United States, that with all of the sanctions, the persecution, the aggression, they haven’t been able to overcome our fighting spirit, our dignity. And they won’t be able to. Venezuela stands up. Every time we’re hit, we stand up with work, with production, with productivity,” Maduro told the Grayzone’s Max Blumenthal in an interview earlier this month.

“So we are facing this war with work, with creativity, with perseverance, with resistance. I can tell the people of the United States that sooner rather than later, we will defeat all of these criminal policies,” he said. “We have alliances around the world with independent governments for trade, financial and energy relations, and we will keep moving forward.”

“This is going to be absolutely devastating for what’s left of Venezuela’s economy. We have to be a little nuanced in the way we look at it,” Lucas Koerner, an activist and writer for VenezuelAnalysis.com, told Radio Sputnik’s Loud and Clear Tuesday. He noted that experts warned of “secondary sanctions” that would target companies who do business with Venezuela.

“It remains to be seen what the impact will be,” Koerner said, noting that “this is part of the Trump administration’s effort to further intimidate India to wind down its oil purchases from Venezuela, denying it of much desperately needed funds to import vital food and medicine. Moreover, these sanctions very well could - they contain a so-called ‘humanitarian provision’ which allows Venezuela to import food and medicine,” he told hosts Brian Becker and John Kiriakou, being careful to note that “these mechanisms haven’t worked” for other countries, such as the DPRK.

They “have absolutely devastating, criminal consequences for those civilian populations. Let’s just remember what happened in Iraq in the 1990s, where over 500,000 children died, according to the UN, as a result of the US embargo imposed there,” Koerner noted. “So this is definitely, absolutely criminal and illegal under international law and will have devastating humanitarian consequences.”

Indeed, a report earlier this year by the Center for Economic and Policy Research found that 40,000 Venezuelans had already died in the last two years as a result of US sanctions on medicine in particular.

“This is going to make it very hard for US entities to do business with the Venezuelan private sector. Contrary to the discourse of the Trump administration, that claims to be supporting free enterprise and supporting Venezuelans, the Venezuelan people,” Koerner said. “US banks, but also other financial institutions, are going to be very reluctant to do any kind of business with Venezuelan private firms out of fear that, given this extremely vague language, they could also be sanctioned.”

“The outcome is going to be the same: the absolute strangulation, asphyxiation of what’s left of Venezuela’s economy, which has already shrunk by over 50% since 2012 - largely, especially since 2017, as a result of US sanctions,” he said. “This is clearly a very bald effort on the part of the Trump administration to impose collective punishment … which will have catastrophic consequences for the Venezuelan people if it is not opposed by the US population and by US citizens and by the rest of the world.”