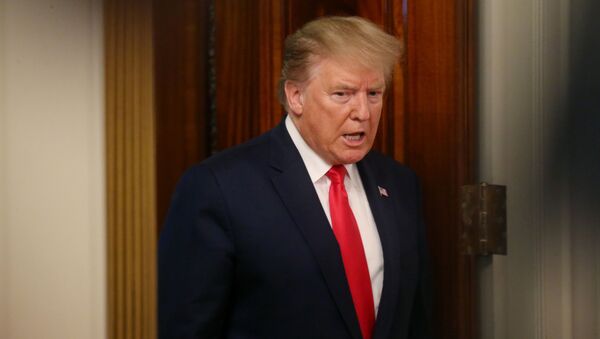 While President Donald Trump spoke in memory of those who “perished in Toledo” while apparently referring to the shooting in Dayton, Democratic hopeful Joe Biden referred to the shootings as “the tragic events” in Houston and Michigan.

US President Donald Trump has landed in hot water while delivering a speech about the recent mass shootings that rocked the country, giving the wrong location of one of the tragedies.

Donald Trump cares so little about mass shootings that he says it happened in the wrong city ("Toledo").

What's worse, he seemingly read it off the teleprompter, meaning the entire White House didn't care enough to get it right, either.pic.twitter.com/OKLVs6nj5V

Everyone when Trump said Toledo instead of Dayton pic.twitter.com/WV074wFLCw

I remember when Trump talked about Obama using a TelePrompTer #Toledo At least Obama could read it... pic.twitter.com/va2b2a1gYf

Stop blaming Trump for saying the mass shooting was in Toledo instead of Dayton even though he had a TelePrompTer.

The guy had to play golf all day Saturday and Sunday people and it’s not his job to memorize trivial details.

However, former US vice president and current Democratic presidential hopeful Joe Biden apparently managed to trump this achievement, describing the shootings as "the tragic events in Houston today and also in Michigan the day before" while speaking to donors at a fundraiser in San Diego, though he later corrected himself.

At a fundraiser on Sunday, Joe Biden referred to mass shootings in “Houston today” and Michigan yesterday, @LAWinkley reports. The shootings were in Dayton and El Paso, respectively. pic.twitter.com/EvppvklkvZ

And just like with Trump, the social media crowd seemed reluctant to give Biden a free pass.

Sorry, but if we hit Trump for calling the mass shooting in Dayton “Toledo,” we can’t let Joe Biden off the hook for calling El Paso and Ohio “Houston and Michigan.” He’s out of touch and past his prime, too. https://t.co/xpYbK3aYqC

Yes, Trump said the wrong city (Toledo), which is so Trump. But don't forget: Joe Biden referred to shootings in Houston and Michigan yesterday.

Most of the people who are attacking Trump for saying "Toledo" instead of Dayton are not going to say a word about Biden pic.twitter.com/EYrQiYriWE

Me: Can't be worse then Trump confusing Dayton and Toledo

#ItsGettingTooHardTo keep track of all the mass shootings.

Joe Biden thinks they were in Houston and Michigan.

In his #Trumpspeech, trump thought it was in Toledo.

None of these shootings are funny. But neither is the fact that these guys couldn't get it right.

As the Washington Examiner points out, this isn’t the first such mistake that Biden has made during the ongoing campaign. In May, he ended up confusing former UK Prime Minister Margaret Thatcher with then-Prime Minister Theresa May.