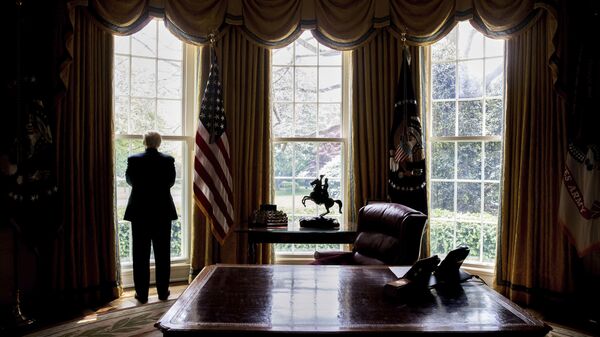 WASHINGTON (Sputnik) - The latest US sanctions imposed on Russia were motivated by President Donald Trump’s desire to look tough on Moscow in his reelection strategy and to show support for new UK Prime Minister Boris Johnson, analysts said.

Trump signed an executive order on Friday that envisages new sanctions on Russia over the alleged nerve agent attack on former Russian double agent Sergei Skripal in Salisbury in 2018. The Russian Foreign Ministry said it was not surprised by the decision but regretted that Washington was sacrificing good relations over the incident.

Trump has been in full campaign mode despite the fact the next US presidential election is not until November of 2020. The US president has been especially fired up by the rival party revving up for their own primaries.

He may also feel vindicated because Special Counsel Robert Mueller’s investigation concluded that the Trump campaign did not collude with Russia vis-a-vis the 2016 US election.

However, Trump is still under fire due to House investigations into his business dealings while many lawmakers still want to impeach him for alleged obstruction of justice. Some Democrats even continue the collusion angle despite Mueller’s findings.

Vision & Global Trends, International Institute for Global Analyses Chairman Tiberio Graziani told Sputnik that the new sanctions had to be understood within the context of Trump’s upcoming 2020 reelection campaign.

"This move is the umpteenth pretext to sanction the Russian Federation once again. In my opinion, this is part of both the continuous US discredit campaign against those Washington believes are enemies or competitors, and within the electoral campaign for the 2020 presidential elections," Graziani said.

Graziani predicted that more sanctions and accusations would be thrown against Russia as the campaign gathered momentum.

"I think that starting next month and throughout the year 2020 moves of this kind will increase and become even more complex", he said.

Eurasia Center Vice-President Earl Rasmussen told Sputnik that the imposition of the new sanctions was a poor and misinformed move designed to appease haters of Russia in the US Congress.

Trump has warmly welcomed the recent ascendance of Johnson to the premiership in Britain and knows full well that London is obsessed with the Skripal case.

Graziani said that for this very reason the timing of the new sanctions suggested that Trump wanted to show his strong support as quickly as possible for the new UK prime minister, who is staunchly anti-Russian.

"It is my conviction [that] the so-called Skripal affair was resurrected by the Trump Administration precisely to send a signal to the new British Prime Minister Boris Johnson", Graziani said.

However, the new sanctions will have minimal impact on US-Russian dealings, Graziani stated.

"Since the exhumation of the Skripal case also has the objective of irritating the Kremlin, the impact will only be of media nature. Therefore, the repercussions on bilateral relations are likely to be minimal", he said.

Rasmussen found the timing of the sanctions suspicious given the fact the Skripal conspiracy was gradually dying.

"The Skripal case continues to unravel much as the Russia-Gate Hoax", Rasmussen argued. "The Skripal affair seemed to have fallen out of the agenda. Why did the US bring up this issue again? Could it be linked to the fact that there is a new prime minister in the UK?"

Rasmussen also pointed out that the UK failed to follow internationally agreed upon procedures while no evidence has been shared with Russians "only unfounded accusations".

This move will further aggravate US-Russian bilateral relations and is definitely not in the long term strategic interests of the United States, Rasmussen concluded.

In March 2018, former Russian intelligence officer Sergei Skripal and his daughter Yulia were found unconscious on a bench in the English town of Salisbury, close to the Porton Down biological warfare research centre.

Before an investigation into the incident had even been launched, the UK authorities immediately claimed they had been subjected to alleged poisoning by a military-grade nerve agent and that Moscow was "highly likely" to have been behind it.

Later, the Porton Down laboratory was unable to confirm that the substance used in the attack was produced in Russia. Moscow, in turn, stressed it had never created, stored, or used toxic chemicals known under the name Novichok, calling the media claims about on the affair "a hoax".