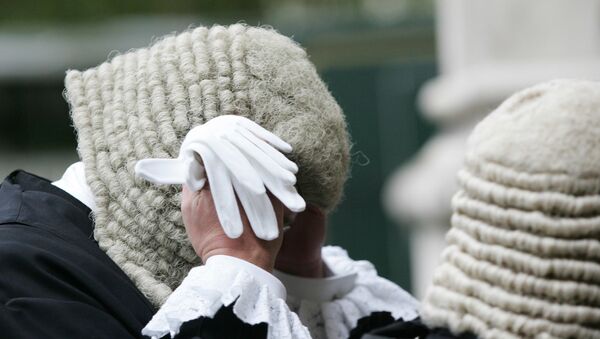 © AP Photo / SANG TAN
Subscribe
Chris Summers
All materialsWrite to the author
In 2006 the British media went on a feeding frenzy after a sexy Brazilian cleaner was accused of blackmailing an immigration judge and stealing “intimate” video tapes from another judge. Sputnik has caught up with Roselane Driza, whose former husband, a multiple killer from Albania, was jailed for life in April.

A Brazilian cleaner who was removed from Britain after she was embroiled in a sex scandal with an immigration judge has spoken for the first time about her life since fading out of the headlines.

During the sensational trial in 2006 it emerged Judge Ilyas Khan, 60, had texted Roselane Driza, who was then 37, called her "chilli hot stuff" and told her how much he enjoyed making love to her.

In 2006 Ms Driza was convicted of blackmailing a female judge and stealing sex videos from Judge Khan but was later cleared on appeal.

Ms Driza, who had been studying philosophy, had entered the UK illegally and after the case was over she was removed and is now back in Brazil.

It also emerged her then-husband, an Albanian called Mane Driza, was a wanted man - suspected of a murder in London in 1999.

A man who went on a three year killing spree across Europe has been found guilty of his fifth murder in Britain. 41 year old, Mane Driza, who was nicknamed Tony Montana after the Scarface film - killed a man in Wembley in 1999. #HeartNews pic.twitter.com/8uhmis6HKJ

​Mane Driza arrived in the UK in August 1997, claiming to be a 17-year-old called Sokol Drenova who was fleeing from the conflict in Kosovo.

He then met and married Roselane but fled the country shortly after murdering Stefan Bledar Mone, a fellow Albanian, in a row which he would later claim was about his wedding ring.

Driza, who was nicknamed Tony Montana after the character in Scarface, then murdered four people in Albania and Italy and was eventually back to the UK from Sicily earlier this year and jailed for life in April, 2019.

Roselane said she was surprised the UK police had not told her about Driza's trial and only found out about it in July 2019 and was then angered when she saw her photograph linked to him.

Ms Driza, who now works as an investigative journalist in Brazil, said: “He always told me other stories. He is really just a liar. I was shocked when I saw my photos linked to his crimes. How absurd. British police said they would call me this week.”

She said she first met him in a nightclub in 1999.

“He was very polite and kind and so in love with me…but after we got married he became strange with me and started going out alone with that man who he killed [Stefan Bledar Mone]. He told me he killed that friend because of our wedding ring. I am very lucky to still be alive,” Ms Driza said.

At the murder trial earlier this year Driza claimed he killed Mone in self-defence after they rowed about a wedding ring which Driza claimed Mone had stolen.

Cleaner Caught in a Love Triangle

Ms Driza came to Britain in the 1998 on a six-month tourist visa and had been employed as a cleaner by both the immigration tribunal judges, who were former lovers.

She then began a relationship with Judge Khan.

Ms Driza said of the female judge: “She was jealous and did not accept that the man who left her in the past now was in love with her ex-cleaner. She told him if he would not leave me she was going to take poison.”

When the disciplinary report was published in May 2008 it concluded no further action should be taken against Judge Khan but Lord Phillips said the decision of both judges to employ Ms Driza was "ill-judged, particularly in the light of the jurisdiction within which they both worked."

Sex Videos At Heart Of Case

In October 2006 Ms Driza was jailed for 33 months for stealing the explicit videos from Judge Khan and blackmailing a woman judge, who was never identified, for £20,000.

The court heard the videos showed Mr Khan having sex with two women, one of them was allegedly the other judge.

But in 2007 Ms Driza’s convictions were quashed by the Court of Appeal because of new evidence and charges against her were dropped before a retrial.

Ms Driza, who uses the Twitter profile name @chillihotstaff, said a lot of evidence she could have used at her trial was on two of her mobile phones which the police seized.

Ms Driza said the Crown Prosecution Service told her solicitors there was no relevant evidence on the phones.

She said her trial had cost around £1 million and she felt the judges should have been asked to pay the cost.

Ms Driza said: “I am very, very grateful for all the British people who believed me and took my side. May God bless all of them and Britain. I received almost 200 letters from guys who wanted to date me and marry me and I keep all of them with me.”