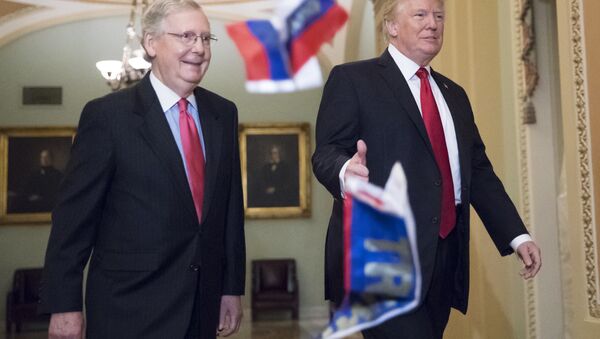 Earlier this year, Republican Senate Majority Leader Mitch McConnell lashed out against his Democratic colleagues, accusing them of suffering from “Trump derangement syndrome” after the Mueller investigation into allegations of collusion between the Trump campaign and the Russian government in the 2016 election vindicated the president.

Democrat-leaning DC media, pundits and social media users have branded Senator Mitch McConnell “Moscow Mitch” and accused him of being a “Russian asset” over his move to block a pair of Democratic-sponsored election reform bills, The Hill reported.

One of the bills proposed the use of paper ballots and federal funding support for the Election Assistance Commission, while the other would have required would-be candidates, officials from their campaigns and family members to report offers of assistance from foreign actors to the FBI.

Republicans, including McConnell, slammed the bills and called them a blatant attempt by Democrats to improve their chances in 2020.

“It’s just a highly partisan bill from the same folks who spent two years hyping up a conspiracy theory about President Trump and Russia,” McConnell said, adding that he and his colleagues were concerned about Democratic efforts to involve the federal government in the ability of state and local governments to control the electoral process.

McConnell’s decision to block the bills sparked a flurry of conspiratorial claims about the long-time senator being an “unpatriotic” tool of Russia, with a Washington Post op-ed calling him an outright “Russian asset” and accusing him of “doing Russian President Vladimir Putin’s bidding.”

Others picked up the MSNBC/WaPo narrative, reviving the (long debunked) claims that “Russia put Trump in the White House,” and claiming McConnell was “letting them do it AGAIN in 2020”.

Putin is especially grateful to #moscowmitch Tell him the check has been deposited! pic.twitter.com/wAirMfrjM6

McConnell fired back on Twitter, reiterating his earlier sentiment that “the Democrats’ Russian conspiracy theories against President Trump hit a dead end during the Mueller hearing,” and adding that “now, like a failed doomsday cult that predicted the end of the world, the liberal grifters need a fresh target: Mitch.”

It started with MSNBC’s Joe Scarborough calling me #MoscowMitch. Then the Resistance piled on. Soon it was trending across the country on Twitter.

“And while it’s fun to laugh it off, we can’t. Because behind their insane Russian conspiracy theories are literally millions of dollars from the left-wing activists they animate,” the senator added.

Others, including former senator Orrin Hatch, called the claims by WaPo that McConnell had effectively “committed treason” “unacceptable” media hysteria.

A major newspaper printed appalling allegations that the Majority Leader of the United States Senate has committed treason.

Even if many are simply tuning out these media hysterics because they’ve been programmed to 11 for so long.. this is unacceptable. https://t.co/bHGEXWa5Hl

Many users also suggested that the evidence-free allegations against the senator, who has repeatedly backed a hard-line stance against Moscow on everything from the New START nuclear treaty to the 2014 Ukraine crisis to a 2017 bill sanctioning countries buying Russian arms, were reminiscent of 21st century McCarthyism.

Mitch McConnell is a Russian?

The left has seriously lost their marbles. Apparently they've decided full on McCarthyism is the way to go into 2020 lol.

Thought of Caity's article when I saw "McConnell's a Russian" trending. McCarthyism aside, the MSM/ruling elites single out the nations they do because those nations don't follow the script. They don't bend to U.S. imperial will. It's all propaganda in the end. https://t.co/HFmNybVlnO

This is abuse of the rights afforded a free press. We need to change our defamation and libel laws and hold "journalists" accountable for unsubstantiated smears.

Even some opponents of the Republican agenda blasted the claims, accusing the media of engaging in “astroturfed propaganda”.

Yeah, let's not go after Mitch McConnell for reasons to actually disagree with him. No, let's revive McCarthyism. That'll advance humanity higher and further. https://t.co/l2uVrQqZcL

Democrats have also been blocking election reform and in fact Debbie Wasserman Schultz and Brenda Snipes were caught red handed in Florida tampering with ballads numerous times. MSM is complicit as they no longer do exit polling. Everyone who thinks it's Russia is being played!

Ah, more McCarthyist MSM astroturfed propaganda -> "Mitch McConnell is a Russian". If I had a dollar for every time someone cited alleged Russian involvement without proof (or called someone a Russian), I could buy all the Vodka in Russia. More political theater. 🙄Пожалуйста!

Last week, the Republican-led Senate Select Committee on Intelligence said it found no evidence that any votes were changed in the 2016 presidential election despite claims of “extensive” Russian “activity” against state and local election infrastructure during the campaign.

Russia has repeatedly denied claims that it had interfered in the 2016 campaign, pointing to a lack of substantiated evidence, and to the claims’ politically motivated nature. Earlier this month, Anatoly Antonov, Russia’s ambassador to the US, said that in the current political climate, he expects to see claims of ‘Russian meddling’ in the US electoral process “multiply” ahead of 2020, notwithstanding US investigators’ abject failure to prove any of the claims about Russian interference in 2016.