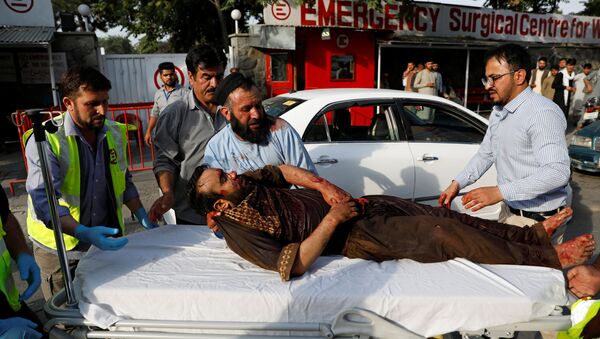 KABUL (Sputnik) - Two people were killed and at least 25 more were wounded as a result of a bombing that occurred near the electoral office of Afghan President Ashraf Ghani's deputy Amrullah Saleh on an airport road in the country's capital Kabul on Sunday.

Vice presidential candidate Amrullah Saleh was injured in a blast that hit Kabul earlier in the day, Reuters has reported referring to two photographs.

According to the Straits Times, the photographs shared by a government official showed Mr Saleh sitting in a garden with bloodstains on his right arm, surrounded by security guards.

Mr Saleh belongs to Afghanistan's Green Trend party and has previously worked as the head of the country's intelligence agency.

Amrullah Saleh got injured today in an attack by Taliban. #KabulAttack ISI would be happy, but that happiness won’t last long. pic.twitter.com/0gfFLpjBJA

​According to Sputnik's correspondent, the attack has claimed the lives of two people and left at least 25 injured.

Two out of four terrorists, who have attacked the electoral office of Afghan President Ashraf Ghani's election running mate Amrullah Saleh in Kabul earlier in the day, have been gunned down by the police, Nasrat Rahimi, the spokesman for the Afghan Interior Ministry, said.​

A group of four militants stormed Saleh's electoral office following the explosion. Later in the day, the Afghan Interior Ministry confirmed that there was an attack on the electoral office building.

"A group of four militants has stormed the office of Afghanistan Green Trend on the airport road, one of four attackers has been gunned down and the fighting is ongoing in the area," Nasrat Rahimi, a spokesman for the Interior Ministry, said.

Another video from #Kabul blast pic.twitter.com/H5xn9IOrD3

Mr Rahimi added that special forces had been deployed on the site and the roads leading to the area were closed to traffic.

No militant group has so far claimed responsibility for the bombing.

Previously, Reuters reported, citing Afghan officials, that an explosion hit the centre of Kabul during rush hour on Sunday.

The blast took place near the Oranos Hotel, the Ariana TV channel reported and posted footage showing smoke rising from the area of the explosion.

#Breaking: The Ministry of Interior confirms that an explosion has occurred near to the Oranos Hotel in PD15 Kabul city. More details to come soon. #ArianaNews #Afgahnistan #ArianaNewsBRK pic.twitter.com/BbIvs8vSYX

The attack happened on the first day of campaigning for presidential elections, scheduled for 28 September.