Ex-Bush Aide: American Evangelicals ‘Hired’ Trump to Defend Them From the Left 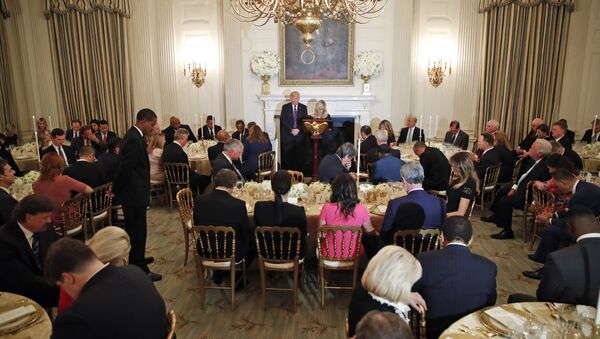 Donald Trump was widely seen in the 2016 election as the mouthpiece of a large group of American voters, who felt they were losing their status in an era of growing religious and ethnic diversity, and Evangelicals are among Trump’s biggest fans, according to recent studies.

Peter Wehner, a former aide and speechwriter for Republican presidents, has taken aim at Donald Trump’s alliance with the Evangelical community.

Speaking on CNN Saturday, Wehner argued that the Evangelicals’ backing of POTUS “is about as strong as I’ve ever seen in American politics. And a lot of it is based on the sense that he will fight for them”.

He agreed with the notion that the Evangelical community “hired” Donald Trump as a “fighter” to stand up for them.

"Not that he himself is of Christian faith,” he said of the president. “Not even he himself is a manifestation of Christian virtues, but they feel like they're involved in an existential struggle against a malicious enemy that they consider to be… the American Left. And Trump will try and vanquish that enemy."

Peter Wehner served in the Reagan and George H.W. Bush administrations prior to becoming deputy director of speechwriting for George W. Bush.

Wehner has strongly criticised the Republicans since the rise of Donald Trump, and recently left the GOP after decades over disagreements with the president’s agenda.

Now a political commentator and contributing opinion writer in several major publications, Wehner, a life-long Evangelical Christian, says he had observed a “corrosive effect” on trust in fellow Christians due to their support for the president.

"I think it's been tremendously discrediting to the Christian faith," Wehner said. "After all, this 'character counts' and 'personal integrity' and political leadership was central to what a lot of evangelicals argued when Bill Clinton was president. And now that it's Donald Trump, they've decided to push it aside, which means for them that reality is a means to an end, not an end. It was something to be used as a political weapon."

"A lot of these white evangelical leaders are doing more to hurt Christianity than the so-called New Atheists ever could," he concluded.

White Evangelical Christians generally are among the strongest supporters of Donald Trump. In 2016, an overwhelming majority of voters in this group (81 per cent) chose him over Clinton, and this sentiment is still strong three years later.