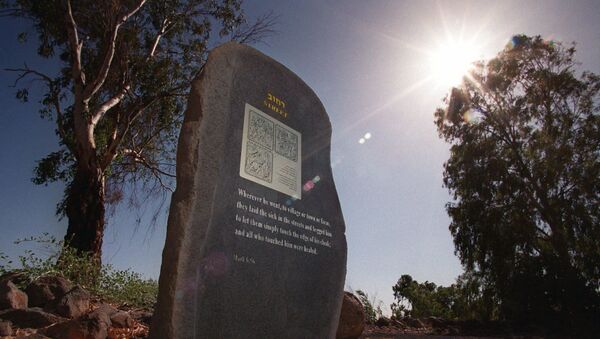 © AP Photo / LEFTERIS PITARAKIS
Subscribe
Archaeologists seem to believe that they've managed to find the ruins of the fabled church due to the account of a Bavarian bishop who toured the region in the 8th century and allegedly visited the church in question.

A team of archaeologists from the Kinneret Academic College and Nyack College of New York have recently unearthed what they believe to be the remnants of the fabled Church of the Apostles which, according to Christian tradition, was built over the home of Peter and Andrew, the disciples of Jesus Christ, in the village of Bethsaida.

According to Haaretz, the excavation in Beit Habek, also known as el-Araj, has yielded "the hallmarks of a large Byzantine-era church", including glass tiles which “are for wall mosaics and only appear in churches", as professor R. Steven Notley noted.

The archaeologists’ belief that the church they’ve discovered is actually the Church of the Apostles appears to stem from the account of Willibald, a Bavarian bishop who toured the region in 725 and wrote about his journey from Capernaum to Kursi, which included seeing the church in question.

"No other churches have been found between those two towns", professor Mordechai Aviam from Kinneret Academic College remarked, while Notley claimed that "there is no good reason to question" this "historical tradition".

While the ruins have yet to be scientifically dated, the church appears to have been built in the fifth century, and to have been abandoned in the late seventh or eighth century, the newspaper adds.

The excavation team has so far unearthed only the southern part of the church, with the artefacts discovered on the site including marble fragments of a screen which was used to separate the priest at the altar from the congregation, roof tiles, mosaic fragments and "a fragment of a chalk carving featuring a cross".