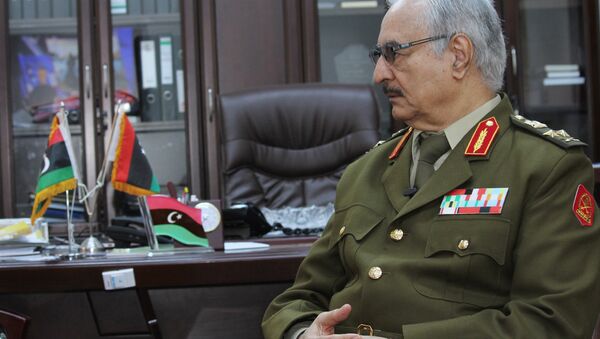 The Libyan National Army (LNA), led by Field Marshal Khalifa Haftar and based in the east of the country, has been engaged in an offensive to gain control over the capital of Tripoli, held by the Government of National Accord, since early April. In July, it successfully completed the first stage of this operation.

Former officer in the Libyan National Army (LNA) Muhammad al-Hijazi has told Libya Al-Ahrar that his old commander, Marshal Khalifa Haftar, had hired witches and sorcerers to influence other people.

“They used what you can’t even comprehend. Even sorcerers from Chas and Niger came to them”, he said in the interview.

Without specifying the currency, the man said that one of them had been paid “half a million” to create a magical ring with a precious stone, said to serve as an abode for a genie. He also revealed that every time Haftar attends a meeting, everybody starts clapping and yelling.

The former officer also admitted that he felt like he was in “a strange kind of fog” every time he was near the commander, noting that he started trembling when he entered the LNA command and that he would feel like his whole body was numb.

Since the overthrow and assassination of Libya's long-time leader Muammar Gaddafi by US-supported Islamist extremists in 2011, the country has been divided between two governments. The eastern part is controlled by the Libyan National Army (LNA) and the western part by the UN-backed Government of National Accord (GNA).

In April, the LNA, led by Marshal Khalifa Haftar, launched an offensive to retake Tripoli from forces loyal to the GNA. The LNA has already taken a number of settlements under its control on its way to the capital, including Tripoli International Airport. As Gen. Ali Saleh Qahtani, the commander of the 73rd infantry brigade of the LNA main command, stated earlier in July that their forces had successfully completed the first stage of their operation. The battles have left more than 1,000 people dead and 5,500 injured, according to the WHO.