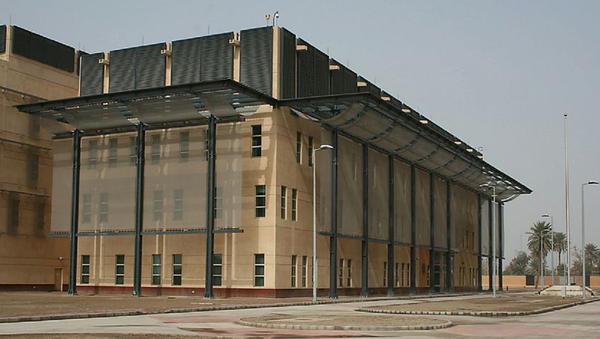 The massive $750 million diplomatic compound, which is nearly the size of the Vatican, was opened in 2009, several years after the 2003 US invasion of Iraq.

Iraqi lawmaker Hassan Salem has accused the US Embassy in Baghdad of serving as a "hotbed for Israel's Mossad and Daesh."

In a weekend interview quoted by Iraq's Buratha News Agency, Salem, a lawmaker from the Sadikun Bloc, the political wing of the Popular Mobilization Unit-affiliated militant group Asaib Ahl al-Haq, argued that the US embassy should be shuttered, since it is unable to stop its "suspicious activities," including "interference in Iraq's affairs, espionage, and provoking rumours and hatching plots."

"The US Embassy's violation of laws and forgetting its responsibilities based on the international laws means that it cannot be called an embassy and therefore, its closure is legally necessary," Salem said.

The comments weren't the first time Salem has accused the US of cooperating with Daesh. In February, he claimed that wanted Daesh leader Abu Bakr al-Baghdadi was traveling freely somewhere in Iraq's Anbar province under the protection of the US military. According to the Salem, the US was supporting Baghdadi amid concerns that Iraq might approve a measure to expel US troops from Iraq in the aftermath of Daesh's defeat.

The US, which formed a coalition to fight Daesh in Syria and Iraq in 2014, has not commented on Salem's allegations.

The Popular Mobilization Forces are an umbrella paramilitary force consisting mostly of Iraqi Shiite Muslim militias formed in 2014 to fight Daesh, with many of its members previously fighting the US occupation after the 2003 invasion. In recent months, these and other forces have pressured US troops stationed in the country to leave the country.

Earlier this year, US President Donald Trump said he intended to keep US service members stationed in Iraq to "watch Iran." Iraqi President Barham Salih responded by saying Washington had not requested permission from Baghdad to do so, while lawmakers announced a bill to terminate the security agreement between Iraq and the US.