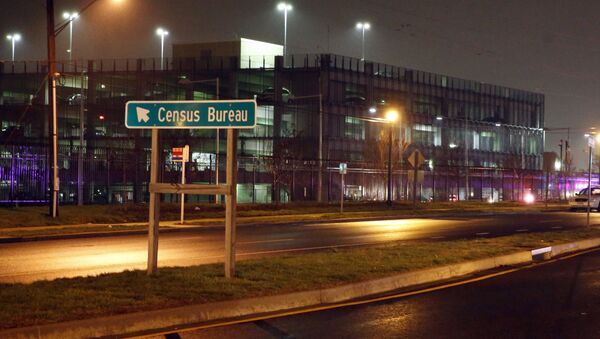 © AP Photo / Alex Brandon
Subscribe
On Thursday, US President Donald Trump said he is issuing an executive order requiring government agencies to hand over requested documents regarding citizens and non-citizens to the US Commerce Department.

"I am hereby ordering every department and agency in the federal government to provide the Department of Commerce with all requested records regarding the number of citizens and noncitizens in our country," Trump announced in the Rose Garden Thursday. "They must furnish all legally accessible records in their possession immediately. We will utilize these vast federal databases to gain a full, complete, and accurate count of the noncitizen population."

“We will leave no stone unturned,” Trump said. "We are not backing down on our effort to determine the citizenship status of the United States population." The president also noted that the Census Bureau had previously said that it could determine the number of US citizens versus noncitizens with 90 percent accuracy, which would provide more accurate data than adding a citizenship question to the 2020 census.

US Attorney General William Barr, who was also present at the announcement, later told reporters that he believes the government has ample justification in its interest in inquiring about citizenship status in the census.

Prior to the announcement, Trump, speaking at the so-called "Social Media Summit," expressed frustration over the Supreme Court decision last month that the US government cannot add a citizenship question to the census. According to the Supreme Court, the Trump administration’s rationale for adding the question, that it would help the government enforce the Voting Rights Act of 1965, was inadequate.

"Can you believe - Are you a citizen of the United States of America? 'Sir, you can't ask that question.' Why? 'Because the courts said you can't.' We have three very unfriendly courts. They fight us all the way. Judges don't like us too much, I guess," Trump said Thursday.

In June 2018, the American Civil Liberties Union (ACLU) filed a lawsuit in the US District Court for Southern New York on behalf of a coalition of immigrant rights groups, claiming the proposed census question would create a door-to-door federal inquiry of the citizenship status of every member of every household in the United States.

000000
Popular comments
Yes, and once theyre done collecting citizenship data on all other minority groups, then they'll go to every "white trash" in the US. Only then white folks in the US will realize the mistake they've done. D.umb white people think they're doing themselves a favor....the banks own the US, not its citizens.