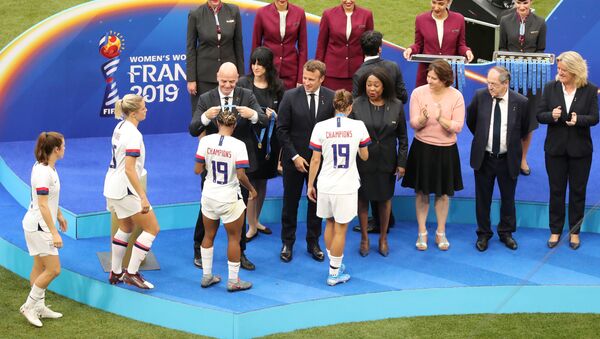 Referee and sports journalist Fernanda Colombo attracted the attention of many after a joke on the field during a friendly game in Ecuador when instead of a card she took a handkerchief out of her pocket.

"I decided to play a joke just because it was a festive game. [The joke] should have stayed on the field. The fact that it went beyond its borders surprised me, especially because it went viral all over the world", the woman admitted in an interview with Sputnik.

After she became popular, Colombo received an indecent proposal from a man who offered her money in exchange for meetings with his clients. Offended, Fernanda decided to share this on social networks.

"It was terrible. We, as women, feel that we are being disregarded when we get this. But this is a warning for us that this happens in the world. This is the real world", the ref noted regrettably.

Fernanda Colombo belongs to a growing number of women in football. In addition to refereeing and journalism, women are increasingly playing an important role in the sport.

The 2019 Women's World Cup is one such example. It took place in France this year and broke various records, having attracted world attention not only to the sport but also to the problem of sexism, which is still present in football.

Fernanda pointed to the participation of the Brazilian national team, calling it an important step.

"It was an important step for women's football. The players from Brazil were not in very good shape before the start of the World Cup, however, they were impressive and able to convey a message – to show that [women’s] football has its value and that women need support”, she said.

During the games, the women's team attracted the attention of millions of Brazilians, who watched the team on TV. Fans have called for more investment in women's football. Moreover, it was a total delight to see Marta [Vieira da Silva] become the top scorer in the history of the men's and women's World Cups.

Fernanda Colombo also stressed that the cup brought women's football to a new level. She recalled the unprecedented success marked by FIFA and the importance of broadcasting games on Brazilian television, which could help popularise women's football.

"Football no longer has a gender. It's great to see women in the stands attending the games, working as referees, journalists, and players. I really like football. So for me, this is a big platform for self-expression", Fernanda admitted.

Speaking of Brazilian men's football, Fernanda commented on the Copa America final. According to the results of the cup, Brazil became the champion after beating Peru 3-1.

"I think Brazil has a lot to improve, but it did become a champion. There is nothing to discuss, the title speaks for itself. I believe there be will be some changes because 2022 is approaching and many players who have played at the Copa America will not be able to play", the referee explained.

She also criticised the refereeing not only in the final game but also in the championship overall. Colombo noted that the use of a video assistant referee (VAR) needs to be improved because, in her opinion, the referees of the Copa America showed uncertainty about its use.

World Cup in Russia Was an "Incredible Experience"

Sputnik also asked Fernanda Colombo about her impressions of being at the FIFA World Cup in Russia last year.

"It was an incredible experience. The Brazilians were very confident. I went to watch the final game and the number of Brazilians, who had already bought tickets to the game, thinking about the final, was impressive", she said.

Fernanda also recalled with pleasure her experience as a tourist in Russia.

"Everything was very well organised in Russia. Everything worked perfectly: subway, trains that connected cities. Everything was excellent and wonderful", the referee recalled and encouraged people to take the opportunity to travel during sports events.

Views and opinions, expressed in the article are those of Fernanda Colombo and do not necessarily reflect those of Sputnik.