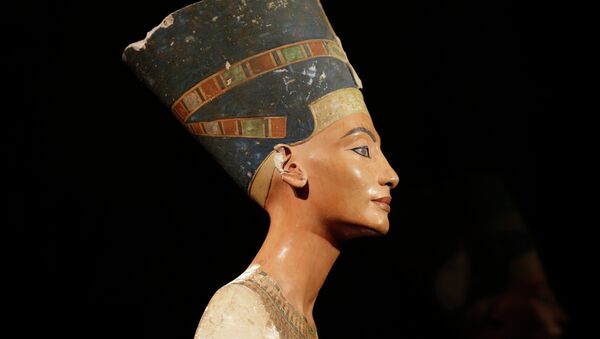 © AP Photo / Michael Sohn
Subscribe
Scientists may have stumbled upon a clue to one of Egypt’s most famous mysteries, as they appear to have possibly located the last resting place of Egypt’s best known queen – Nefertiti, widely-known to have left a whole legacy of her personal trademark beauty and power secrets.

A team of British and Egyptian archaeologists, led by former Egyptian Antiquities Minister Mamdouh Damati, assumed that the female monarch could be buried inside a secret chamber within King Tutankhamun's tomb, a famous tourist draw in Cairo that was a subject of meticulous radar scanning over a three-day period, News.com.au reported.

Previous radar searches have revealed that there are organic materials behind the walls of Tutankhamun's tomb, but no one is sure whether they are naturally forming rock cavities or manmade areas.

If proved by chemists to be man-made, the finding is in in tune with a theory put forth by English Egyptologist Nicholas Reeves that implies that Nefertiti, Akhenaten’s wife who was born around 1370 BC and died at about 40 years of age, is indeed buried in one of the rear chambers. It may take breaking down some of the walls in Tut's tomb to arrive at a more balanced conclusion, the scientists said.

Earlier, a finding made by Polish archaeologists hit the headlines as they unearthed the over 2,000-year-old port city of Marea, to the southwest of the ancient Egyptian stronghold of Alexandria, claiming that it might have been a hotspot of early Christianity in Egypt.

Marea was home to a large Christian basilica, which served its religious purpose from the fifth to the eighth centuries, and right underneath there was found an even older Christian temple, complete with a no less valuable cache of ancient artefacts.