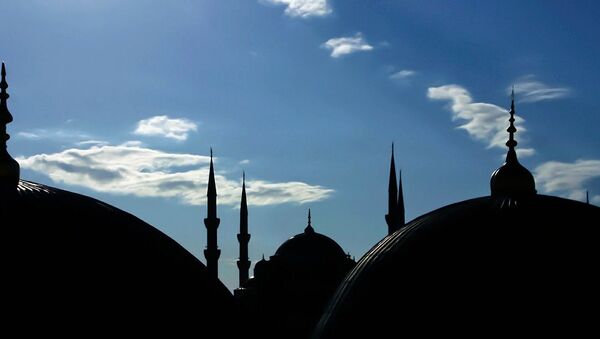 New Delhi (Sputnik): India’s Supreme Court on Monday dismissed a plea seeking to allow Muslim women to enter into mosques and prohibiting the practice of the Burqa, or veil system. The court said it would be willing to hear the petition afresh if it were presented by a Muslim woman or women.

A section of netizens was left stunned to see the Supreme Court of India, which gave its verdict in the case of the rights of women to enter otherwise barred-for-women Hindu temples, not coming up with similar directions for Muslim women.

Those criticizing Monday’s ruling by the apex court said the court was contradicting its own order of September 2018, when it had ruled that women of all age groups could enter the Sabarimala Temple in Kerala, and freely practise the Hindu religion and exhibit their devotion and worship towards the presiding deity Lord Ayyappa.

The then verdict was passed with a 4-1 majority, with Chief Justice Dipak Misra, and Justices A. M. Khanwilkar, R. F. Nariman and D. Y. Chandrachud in favour of permitting women to enter the temple, while Justice Indu Malhotra dissented. The Supreme Court then observed that the custom of barring women was in violation of Article 25 (Clause 1) and Rule 3(b) of Kerala Hindu Places of Worship.

SC deserves an explanation on what basis PIL was DISMISSED. And why was Sabarimala PIL considered? https://t.co/LP8p6w0DW8

One Constitution, one court, similar questions..

Same analogy was not applied for sabarimala! Why?

Met a devotee who has been visiting Sabarimala for the last 15 years. He said with so much pain,"The so called Secular Govts @ states n center can't even scratch on d walls of Church and Mosque but can keep Hindu Temples under their control. Hindus r the most belittled persons. pic.twitter.com/dd9v6jm8a1

The apex court said, “Let a Muslim woman come, then we will consider."

Monday’s appeal to the Supreme Court was made after the high court in India’s southern Kerala state had rejected a similar appeal.

The appeal was made by Swamy Dethathreya Sai Swaroop Nath, the president of the Kerala unit of the All India Hindu Mahasabha (Akhil Bharath Hindu Mahasabha).

Sai Swaroop Nath also appealed for the removal of the purdah or burqa system, which requires Muslim women to cover their faces.

Some netizens said that people or groups filing such pleas should avoid such sensitive issues, especially those concerning other communities.

We have a lot of Hindu issues to address, right Sirs ??

This "Revenge attitude for #sabarimala verdict" on Courts is not right
https://t.co/nvm2uZHyVP

​On Monday, the apex court bench agreed with the Kerala High Court order of 11 October 2018, that the plea was nothing more than an exercise in cheap publicity.

The court ruled that the provisions of Article 226 of the Indian Constitution with regard to the alleged violation of fundamental rights, could not be misused for such purposes.