Macron, Rouhani Speak for Hour Over Phone on Saturday - Report 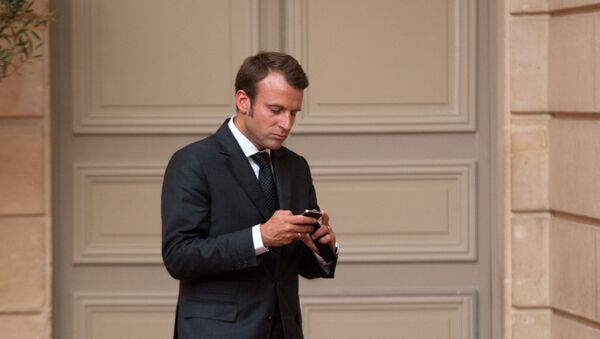 French President Emmanuel Macron said he had agreed with Iranian President Hassan Rouhani to seek conditions for a dialogue resumption between all parties of the JCPOA agreement, Reuters reported Sunday.

According to Reuters, Macron vowed to keep talking with Iranian authorities and other parties involved in the Iran nuclear deal, also known the Joint Comprehensive Plane of Action (JCPOA).

"The President of the Republic has agreed with his Iranian counterpart to explore by 15 July conditions to resume dialogue between the parties", Macron's office said in a statement, cited by Reuters.

On 8 May,  exactly a year after the United States unilaterally left the 2015 accord, Tehran announced it would suspend some of its obligations under the JCPOA, giving the other nuclear deal signatories - France, Germany, the United Kingdom, Russia, China and the European Union - 60 days to save the nuclear accord by facilitating oil exports and trade with Iran amid US sanctions.

Amid escalating tensions with Washington, Tehran has threatened to exceed the limit on the uranium supply permitted under the historic nuclear pact.

Rouhani said that Iran had intended to start enriching uranium beyond the 3.67 percent level outlined in the JCPOA and will maintain enrichment at a level it considers necessary.

US-Iran strife has significantly escalated the security situation in the Middle East. The United States, in particular, has been building up its military presence in the region in what US National Security Advisor John Bolton called a clear message to Iran.

Despite that the United States was close to approving military action against Tehran last month after a US drone was shot down by the Iranian military, President Donald Trump has repeatedly said that he is open to talks with the country's leadership without any preconditions.

Last week, Rouhani said in a previous phone conversation with Macron that Tehran would not renegotiate the nuclear deal for any reason.