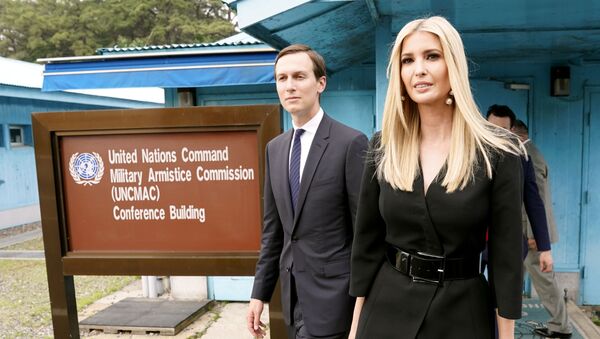 While the Trump team frequently tries to assign roles to Ivanka, formally a senior White House aide, on the president’s foreign trips reportedly because of her flair for speaking on the US government’s behalf, it is unclear what Ivanka did in North Korea during the G20 beyond the ceremonial.

Donald Trump’s historic meeting with the DPRK’s Kim Jong-un over the G20 weekend in the demilitarised zone between the two Koreas has spurred a fresh wave of both interest and frustration on Capitol Hill and beyond, as they were reportedly not alone there.

Another duo is said to have joined Trump when he met “his friend” in the last meeting-none other than the president’s eldest daughter Ivanka and her husband Jared Kushner.

The “first daughter” appears in images later circulated on North Korean TV of the POTUS’s talks with Mr Kim, furthering the general controversy surrounding the role that the 37-year-old campaigner for women’s empowerment plays in the White House.

(!!) U.S. officials say they were not informed that Ivanka Trump and Jared Kushner were present during Trump’s meeting with Kim Jong Un. They didn’t know about it until afterwards, and some have reportedly still not been briefed on the meeting.https://t.co/NcFh4t129N

Even White House officials are WTH about Ivanka's role as some kind of shadow Secretary of State. https://t.co/BaQOrvYgYs

It wasn’t until Monday that reporters (and even Capitol Hill officials) learned Ivanka and Kushner might have done more than just accompany the president into the Freedom House, a building on the South Korean side of the zone, where the US and North Korean heads of state met.

Ivanka and Kushner were reportedly present at the closed-door meeting, where no one else was allowed, and where Trump and Kim exchanged their views on one of the most sensitive topics the world is facing now – North Korea’s nuclear weapons. When asked to describe the experience she reportedly replied: “Surreal”.

(Anyone know the genius who created this art?) pic.twitter.com/LGJHJtfMPU

“In this male dominated world I’m here with you Mother Theresa, do I look ok?” #UninvitedIvanka #UnwantedIvanka pic.twitter.com/dvHFbaXLPW

One even suggested, tongue-in-cheek, that North Korea “finally opens up to the West” thanks to Ivanka’s effort…

BREAKING: North Korea finally opens up to the West!

Who do we have to thank?

…while another wondered why Ivanka’s DMZ pictures didn’t emerge in US media, but only on North Korean TV:

What is interesting is that the photos of Ivanka tohether with Kim Jong-un did not appear in American media. It was covered only in the report by North Korean television. pic.twitter.com/KESy3WBnhK

The question of Ivanka’s role has been repeatedly raised throughout the recent G20 gathering, where she also featured prominently in official leaders’ photographs, rubbed shoulders with the biggies on the sidelines and was even sent to address journalists after her father’s meetings with some of the attending head of government.

Netizens have widely expressed their derision, questioning President Trump’s pick of the person to accompany him on the high-profile event in Osaka, Japan – one with apparently no diplomatic or foreign policy experience.

Many rushed en masse to ridicule Ivanka’s attempt to butt into what they called an “adult” conversation between the heads of state, including Emmanuel Macron, Justin Trudeau and IMF chief Christine Lagarde, as shown in a sneak peek clip released by the Elysee Palace.

The majority, however, directly picked up on Ivanka’s lack of respective expertise:

“It may be shocking to some, but being someone’s daughter actually isn’t a career qualification”, Rep. Alexandria Ocasio-Cortez (D-NY) said on Twitter. “It hurts our diplomatic standing when the President phones it in & the world moves on”.

Nevertheless, one senior administration official shared with The Daily Beast that the Trump office often tries to find roles for Ivanka on trips overseas because she is a talented spokesperson, while another official added she often stays in the room during essential policy discussions.

Not only do Trump’s others advisers take note of this, but foreign leaders do as well, with, for instance, Japan’s Shinzo Abe often expressing interest in Ivanka’s women’s economic empowerment ventures.

One former official was meanwhile cited by The Daily Beast as giving his own reasons:

“She matters because the president says she matters. Who in their right mind would cross her knowing that?”

President Trump’s approach to involve his family in the White House has more than once been scrutinised, with many discussing his son-in-law Kushner’s running of a series of foreign policy projects, which has led to investigations over the Trump team’s security clearances.

Former Secretary of State Rex Tillerson recounted in a recent interview with The Daily Beast that he was not infrequently unaware of some important foreign policy decisions due to Kushner sometimes running his own Shadow State Department, making decisions on ties with Mexico and Saudi Arabia among other things.