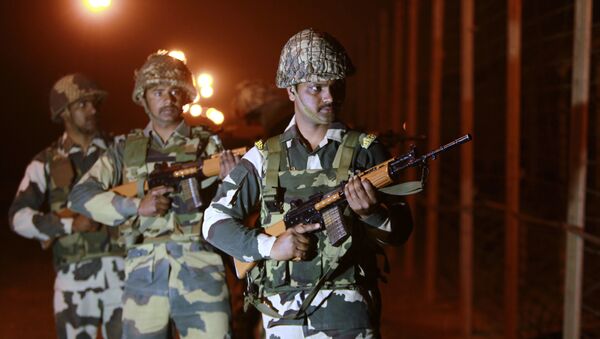 New Delhi (Sputnik): In 18 months, over 80 percent of the drugs seized in Jammu and Kashmir were found to have been smuggled in from Pakistan. It was also meant to promote narco-terrorism. Most of the smuggling is being pumped in from across the LoC and the International Border (IB) that separates the two countries, according to police.

In a bid to prevent the growing drug addiction menace, police in Jammu have launched a de-addiction campaign that also aims to check terror-linked supplies of drugs.

According to a top security official in the Indian state of Jammu and Kashmir, police in the Jammu region are achieving some measure of success in countering a terror-related drug supply chain which has its origins in Pakistan.

Hundreds of young men and women in the Jammu region are said to have become addicted to drugs like heroin.

Police have confirmed terror groups like Hizb-ul-Mujahideen, with a purported base in Pakistan, are directly involved in this trafficking across the border. They are being aided by close relatives and other confidantes.

Police claimed to have not only seized 260 grams of heroin but also over $17,000 (1.2 million rupees) in cash from the smugglers. Ahmed, during police questioning revealed that he was the brother of a Hizb-ul-Mujahideen militant trained in Pakistan and living in the city of Rawalpindi.

Before their arrest, these smugglers had been crossing into India from Pakistan’s Balakot region with their consignment of drugs, said M. K. Sinha, Inspector General of Police, Jammu Zone.

The state police are actively looking at ways to prevent drug-smuggling completely.  “We aren't only trying to tackle the supply side of it but demand side too", Sinha told Indian news agency ANI earlier this week.

Inspector General of Police (IGP) Jammu Zone, MK Sinha: Hizbul Mujahideen cadre are being directed to provide a boost to narcotic smuggling here, and they have tasked their Over Ground Workers (OGWs) to establish smuggling rackets, there is no doubt about that. pic.twitter.com/LGAEwwwMGV

He said Jammu Police have started de-addiction and rehabilitation initiatives like “Care for Your Buddy” and “Counsellors against Drug Abuse” to keep people, especially the younger generation, away from drugs.

“We have deployed counsellors for drug addictions. Such drug addicts are being counselled under 'Care for Your Buddy, Counsellors against Drug Abuse' programme. Jammu and Kashmir Police are also running anti-de-addiction and rehabilitation centres. We are re-equipping ourselves to meet the challenge", Sinha said.

Police have acquired irrefutable evidence of the Hizb-ul-Mujahideen cadre tasking their Over Ground Workers (OGWs) to establish smuggling rackets between Pakistan and India in a sinister design to ruin the next generation and escalate criminal and terror activities, he added.

So grave is the drug menace in India’s Jammu region that there have been reports of household violence for refusing to finance drug addicts’ need to get high. In some instances, students have dropped out of school and colleges over drug-addiction.

Many families don’t wish to talk about their helplessness in tackling the problem. Many of them are also resigned to the fact that they are fast losing the next generation to drug addiction.