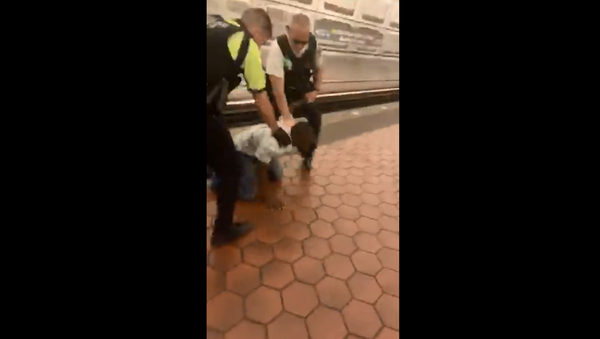 The Washington, DC, Metro Transit Police Department was prompted to open an internal investigation over the weekend after cellphone video surfaced showing an officer using his stun gun on an unarmed Metro rider during an altercation.

Video shared on social media by local resident Che’mere Jones shows two MTPD officers initially speaking with an unidentified individual in a white shirt. Things then quickly escalate after a third officer with a K-9 police vest comes onto the scene and begins to forcibly push the man before striking him with his department-issued stun gun.

A total of 17 seconds passed from the moment that the third officer arrived at the U Street Metro station and when he deployed his stun gun. It’s during this time that Jones attempted to deescalate the situation by repeatedly telling the officer to calm down.

In a statement, the department explained that the officer opted to use his stun gun because the individual “exhibited behavior consistent with preparing to fight the officer.” However, video recorded by Jones does not appear to support this claim, as the unidentified individual is seen with his arms raised and hands open when confronted by the officer.

“[The man] had one hand on the shoulder of a black boy who was handcuffed and the other hand saying ‘Please stop,’” Jones told local station WTOP. “This isn’t just an officer making a mistake. It’s not a mistake - it’s a culture.”

Following the altercation, the man was taken in police custody. The department has refused to identify him and the officer involved in the incident. According to news station WJLA, the department will not be filing any charges against the individual.

Local media reports indicate that the man was speaking to the two officers in an attempt to deescalate a situation in which underage boys had been apprehended at the station over reports of juveniles allegedly threatening transit riders with fireworks.

Ron Holzer, Metro spokesperson, told the Washington Post that no fireworks were ever found at the scene.

Melissa Laws, the mother of one of the teenagers taken into police custody during the Saturday incident, told the Washington Post that she wants to speak with the individual who intervened on her son’s behalf. “I would like to thank him for what he did for the boys,” she said.

“He’s a hero. If he had not done that, it could have been worse.”