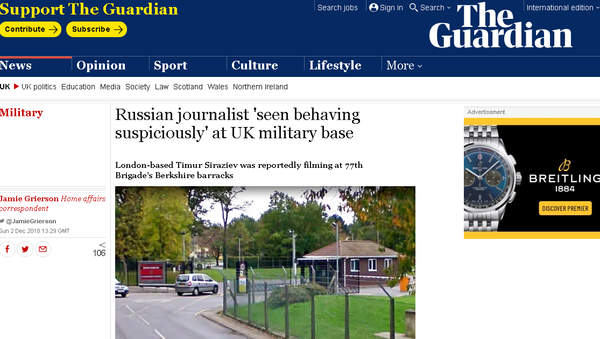 Subscribe
Kit Klarenberg
All materials
Independent journalist Matt Kennard has published a number of documents starkly revealing the degree to which The Guardian has been compromised by British security services, and the impact this relationship has on its reporting of key issues.

The newspaper has long sought to present itself - to readers and advertisers alike - as Britain’s foremost ‘anti-establishment’ outlet, and took a leading role in reporting on the mass WikiLeaks cable dump in 2010, and the Edward Snowden leaks in 2013, garnering widespread praise and several prestigious journalism awards in the process.

In the latter case, The Guardian’s dissident credentials were greatly enhanced when in July that year the UK government ordered its then-Editor Alan Rusbridger to destroy hard drives containing the numerous internal NSA and GCHQ files released by Snowden, and GCHQ agents duly visited the newspaper’s offices to oversee the destruction. Videos of the carnage - conducted via angle-grinder - set to ominous music and interspersed with footage of Rusbridger condemning the censorship were shared widely online.

Guardian's deputy editor @paul__johnson joined state censorship D-Notice committee (run by MOD) after Snowden revelations in sop to British spooks. In board minutes, they thank him for being "instrumental in re-establishing links" between UK mil/intel and Guardian. Explains a lot pic.twitter.com/kN27T0QoMm

However, the files shared by Kennard indicate these high-profile episodes in fact respectively represented the beginning of the end, and indeed the end, of The Guardian as an even vaguely dissenting media outlet.

Deputy Editor Paul Johnson becoming a member of Whitehall’s Defence and Security Media Advisory Notice (or D-Notice) committee - which decides what national security issues can be reported on, and how - seems to have been fundamental to this process.

The minutes of a 15th December 2018 committee meeting documents that the body’s chair “thanked” Johnson “for his service to the committee”, as he’d been “instrumental in re-establishing links with The Guardian”.

The precise date of Johnson’s joining is unclear, but another minutes file lists him as being present at an 8th May 2014 committee meeting.

“The engagement of DPBAC [Defence Press and Broadcasting Advisory Committee] Secretariat with The Guardian has continued to strengthen during the last six months, with regular dialogues between the Secretary and Deputy Secretaries and Guardian journalists. Also, because of an agreement between The Guardian and allied publications overseas to coordinate their respective disclosures of Snowden material, advice given to The Guardian has been passed on to The New York Times and others, helping guide the disclosures of these outlets,” the minutes state.

Guardian refused to engage w military/intel censors on Snowden revelations, until "the end of July" 2013 when they "begun to seek and accept" advice, agreeing "not to publish certain...details".

On July 20 2013, GCHQ agents had entered Guardian and demanded to smash up laptops. pic.twitter.com/SXyqB1bGas

​In other words, The Guardian’s relationship with the committee shaped its Snowden reporting, and in turn heavily influenced the reporting of all other newspapers following the story.

Johnson’s appointment may account for why he was chosen to conduct an exclusive interview with MI5 Director General Andrew Parker in December 2016 - the “first newspaper interview given by a serving spy chief” in UK history.

The discussion - in which Parker’s numerous incendiary statements went entirely unchallenged - covered a number of topics, but primarily focused on the apparently growing threat an “increasingly aggressive” Russia posed to the UK.

“[The country] is using its whole range of state organs and powers to push its foreign policy abroad in increasingly aggressive ways – involving propaganda, espionage, subversion and cyber-attacks. Russia is at work across Europe and in the UK today. It’s MI5’s job to get in the way of that,” he alleged.

While a striking disclosure, many may not be shocked at confirmation the newspaper is subservient to the British security state. In September 2013, David Omand, former director of GCHQ and Downing Street intelligence and security co-ordinator, was invited to contribute an opinion piece to the outlet’s website, in which he suggested exposing Western intelligence capabilities was “gratuitously damaging”, praised The Guardian “sensibly agreeing” to the destruction of its hard-drives, and claimed without any substantiating evidence all of Snowden’s files “might now to be in the hands of the intelligence services of Russia and China”.

“Journalists are not best placed to identify security risks; we have to trust those who oversee the intelligence-gathering,” he wrote.

In December that year, Alan Rusbridger also appeared before the home affairs select committee to discuss the Snowden leaks. While presented by The Guardian itself as a courageous performance in which their Editor defiantly stood up for press freedom, defended his paper’s crusading reporting, and demanded major scrutiny of the intelligence services, the actual content of the hearing tells a rather different story.

For instance, when questioned on his patriotism by committee chair Keith Vaz, Rusbridger said “one of the things I love about this country is we have that freedom to write, and report, and to think”, before contradictorily boasting he’d flatly ruled out publication of “a great deal” of the NSA/GCHQ files available to The Guardian. Some files related to Iraq and Afghanistan “we're not even going to look at”, he said.

Concerns about The Guardian’s ties with security services extend beyond mere self-censorship, though - it’s been repeatedly suggested since the 2015 appointment of Katharine Viner as Editor that the paper has served as a dependable conduit for intelligence agency propaganda.

WikiLeaks immediately issued a vehement denial, declaring the story to be completely "fabricated" and noting the paper had given them virtually no time to respond prior to publication - within hours the organisation had set up a legal fund seeking donations in order to sue The Guardian for libel, and were calling for the resignation of Editor Katherine Viner.

The paper responded by softening the report's wording significantly, making clear the story was based entirely on the unverifiable allegations of anonymous sources - although by that time the lurid allegations had already been regurgitated uncritically by mainstream media outlets the world over.

In the months since, the story has almost universally come to be regarded as a prime example of ‘fake news’ - although as of June 2019, neither Viner nor Harding has retracted the story, or even apologised for the recklessly and misleadingly assertive tone of the original article.

Shockingly, it was merely the second time in three months Harding had luridly and baselessly smeared Assange. In September, he published a piece - again based purely on the uncorroborated word of anonymous sources - claiming Russian diplomats allegedly held secret talks in London with associates of Assange, in an attempt to assist in the Wikileaks founder's escape from the UK.

The conspiracy would've apparently entailed Assange being smuggled out of the Ecuadorian embassy under cover of Christmas Eve in a diplomatic vehicle and transported to Russia, where he'd be safe from extradition to the US, ending his eight-years of effective arbitrary detention in the process. However, the audacious plot was said to have been aborted after being deemed "too risky" mere days before its planned execution date.

The story was slammed by the Russian Embassy in London and the Russian Foreign Ministry - but the most damning indictment was issued by Craig Murray, former UK Ambassador to Uzbekistan. Denouncing the article as a "quite extraordinary set of deliberate lies", he revealed he and Fidel Narvaez — a close confidant of Assange — had engaged in discussions with Assange in 2017 regarding a possible departure from the UK capital, and debated possible future destinations for the embattled Wikileaks founder.

"It's not only the case Russia didn't figure in those plans, Julian directly ruled out the possibility of going to Russia. I know 100% for certain the entire story is a complete and utter fabrication. I cannot find words enough to express the depth of my contempt for Harding and Viner, who've betrayed completely the values of journalism. The aim of the piece is evidently to add a further layer to the fake news of Wikileaks' non-existent relationship to Russia as part of the "Hillary didn't really lose" narrative. I am, frankly, rather shocked," Murray wrote in a blog post.

He went on to state he "strongly suspect[ed]" that "MI6 tool" Harding’s informants were the security services, and the story was "entirely black propaganda" produced by British spies.

Whatever the truth of the matter, that Harding enjoys close relations with intelligence operatives is hardly mere speculation - his utterly discredited 2017 work Collusion, which alleged Donald Trump had a clandestine relationship with the Russian state dating back to the 1980s, and had conspired with the Kremlin to subvert US democracy, was largely based on private briefings given to him by Christopher Steele, the ex-MI6 spy turned 'business intelligence' professional who authored the utterly discredited 'Trump-Russia' dossier for Fusion GPS.

In another highly dubious episode involving Harding, in the wake of the apparent poisoning of Sergei Skripal and his daughter Yulia in March 2018, a D-notice was issued ordering newspaper editors to “seek the advice of” the DSMA committee before publishing any reports mentioning “the identities of intelligence agency personnel associated with Sergei Skripal”.

This D-notice is widely believed to have curtailed all media investigation of Pablo Miller, Skirpal’s MI6 recruiter and Salisbury neighbour.

The D-notice was issued on the same day as - and perhaps in response to - a Daily Telegraph story which referred to a nameless "security consultant" employed by Orbis Intelligence - Steele’s private investigations firm - "who lived close to Skripal and is understood to have known him for some time".

It is true, or was. As I say, this 2017 forum thread, which links to Pablo Miller's LinkedIn profile, states Orbis is listed on Miller's CV - https://t.co/Fx0vu1qorJ …. Stop regurgitating anonymous claims by your spook pals and do some research, Luke

​The article nonetheless prompted many individuals to conduct internet searches for Miller, and find his LinkedIn profile, which identified him as a 'Senior Analyst' at Orbis Intelligence - the page was quickly deleted though, and Harding took a prominent role in dismissing suggestions there was any professional connection between Miller and the company, or Steele. In a series of Twitter posts, he even alleged "someone" was using search engine optimization techniques to dishonestly associate Miller and Orbis.

However, by way of a thorough internet search I identified an online forum thread from January 2017 clearly identifying Miller as a ‘Senior Analyst’ at Orbis, linking to Miller's (now-defunct) LinkedIn page as corroboration.

I’ve repeatedly presented Harding with this and other documentation supporting the fact of Miller’s Orbis employment, but he remains resolutely steadfast in his conviction - on one occasion, when I confronted him in person, he claimed to “know it’s not true” based on “sources” he refused to reveal.

Whether Harding’s loyal to his intelligence sources to the point of unquestioning and overcredulous blind faith, stringently adhering to the restrictions of the D-notice, or willing to ignore evidence contradicting their allegations for more sinister reasons, is unclear.