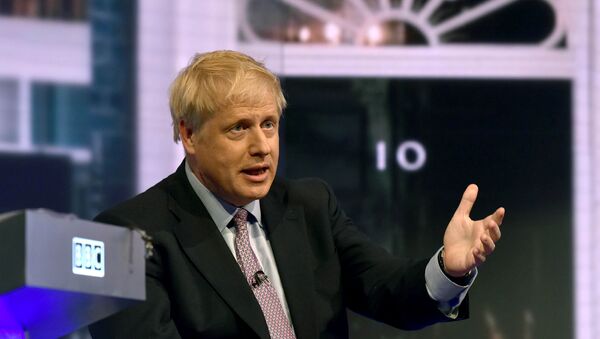 Jon Gaunt
All materials
Words do have consequences. However, the lack of one particular word should also have massive consequences for the BBC. That word is “SORRY”.

The BBC’s refusal to apologise for giving a platform to the anti-Semite and rape apologist, Abdullah Patel, in the future Leader debate should signal the end of this out of date biased and bloated broadcasting dinosaur. It should also end the career of the producer of this drivel.

The whole “debate” was clearly designed to not only stitch up Boris Johnson but also to portray the Tory party and their potential leaders as chaotic, disorganised, and at each other’s throats. In essence that none of them are fit to govern.

This bias started with the set design of perching middle-aged men on high bar stools to make them feel and look uncomfortable. Even ‘Mick Jagger’ Rory looked ill at ease! He made an effort to be “down with kids” by ripping off his tie and manspreading (I didn’t know what this meant either until my daughter explained! It means spreading your legs wide open? Nice!)

I have a suggestion for the BBC. Next time, how about getting all the contestants to strip to their swimming costumes, which in Rory’s case would probably be a pair of Budgie Smugglers, and have the debate and contest to find our next PM on Love Island!

Why not? The BBC and indeed Channel 4 both seem intent on turning politics into light entertainment. One thing's for sure on Tuesday’s performance no one had a talent and no one would have got the Golden Buzzer.

However, Emily Maitlis seems to think her role is to be the Simon Cowell of “Politics got no talent” as she constantly interrupted, especially Boris (23 times I counted), and thought her interjections were more important than the wannabes' opinions.

I am taking the proverbial of course but there are serious issues to discuss here.

Why was there no studio audience? Who chose the contributors? But most importantly are we really meant to believe that the vetting process did not pick up the fact that Abdullah was the real potential fascist in the room, or on the satellite link, and not Boris?

I have appeared on more BBC TV debates than I care to remember, including everything from those Sunday Morning discussion shows to Question Time and let me tell you they vet and question you more than a US immigration Official when you’re trying to enter the States Via Miami airport.

One of the reasons I politely decline going on them now is not just the pitiful pittance that Nicky Campbell’s producers offer you but also the interrogation and the obvious casting procedure they utilise. Believe me, the producers frame the debate from the word go and they have more clearly defined traps and roles for each guest than the producers of Big Brother had for people like George ‘Pussy cat’ Galloway.

So, I find the BBC defence that Abdullah had closed his Twitter account two days before the debate to be lame if not a downright lie.

They would have been planning this debate for longer than 2 days and surely alarm bells would, or should, have rung if a spokesman like this was not on social media.

No, let me humbly suggest that the plan and the plot actually went like this.

“Let’s get a Muslim to ask Boris the Burka question and then let’s stitch up and wreck his chances of becoming PM.”

Then a producer would have declared, “I’ve got an Imam”.

This was apparent when Emily was straight in with the aggressive supplementary questions after the rape apologist said his bit about words having consequences.

It was also pitiful and predictable that Sajid Javid used this question to bully all the other contestants into agreeing to have an investigation into Islamophobia in their party. This was playing to the gallery par excellence.

And do you know what kids? The BBC would have got away with it and the headlines the next day and the news agenda for weeks would have all been about the “rising tide of Islamophobia” in the UK.

The agenda would have been seized and manipulated again. Don’t believe me? Well how come Abdullah was on Nicky Campbell’s radio show the next morning?

Did they not vet him either? Well not according to Nicky, who fair play to him, has apologized for having him on his show. What a pity his overpaid bosses can’t seem to do the same. It is a case of “Sorry seems to be the hardest word” for them!

Back to the plot! The BBC’s cunning plan disintegrated when Abdullah, straight after the programme and after getting his essential selfie in the Bristol studio couldn’t help but reopen his Twitter account and brag that he had stitched up Boris.

Unfortunately for him, and the BBC, this also revealed his undying support for Comrade Corbyn. It also exposed succession of his foul anti-Semite tweets and of course his blaming of women for rape.

It also emerged that Abdullah was also a Deputy Headteacher at a Muslim school! You really couldn’t really make this up! I give credit to the school and his mosque for suspending him immediately but one does have to point out that this school does not exactly have a high reputation with the education watchdog OFSTED. They who branded it as “inadequate” in 2018.

Talking of watchdogs, OFCOM are now being urged to investigate this BBC “debate.” But as per usual it is too little too late as the damage has been done.

The BBC were bragging that over 5 million people watched the show and the overwhelming impression would surely have been given that Boris is Islamophobic and that the Party is not fit for purpose, which may or not be true!

BUT, and this is the real problem, it is not the BBC or Emily’s job to make that decision on behalf of the people of the UK.

This is clear bias and heads must roll (if I am still allowed to use that term in Snowflake Britain).

Of course, my casting accusation is given further weight by the fact that it has now emerged that the last questioner was a Labour Party supporting solicitor called Adam Thaker.

Adam is a mate of Jeremy Corbyn and Shami Chakrabarti.

He is a former Labour candidate and he was brought into the complaints department of the Labour Party to close down accusations of anti-Semitism in the Party. Again you could not make this up!

Did the BBC not vet him either? They can’t use the “he closed down his Twitter account” with him as it remained open and had a tweet which said, “Hitler's abuse of the term nationalism is, to me, a nationalist, the most harmful part of his legacy.”

I beg to differ Adam. I would perhaps suggest the Holocaust of SIX MILLION JEWISH PEOPLE was the most harmful part of Hitler’s legacy!

Adam has also been suspended from his job whilst the firm carries out an investigation!

Now the news is breaking that the 15-year-old girl who posed the environmental question is a climate activist and a member of the Student Climate Network that organised the mass walkout by children in schools in February. I told you that you could not make this up!

If the BBC knew the backgrounds of all three of these questioners it should have declared that when introducing them and if they “didn’t know” we need to know why they didn’t know?

To add insult to injury the BBC, fresh from stealing the free TV licence fees from 3.5 MILLION pensioners are still refusing to apologise for these mistakes or this clear bias.

Who the bloody hell do they think they are?

This programme was a clear attempt to influence the outcome of the leadership election.

More importantly, it was a clear breach, on so many levels, of the BBC’s own impartiality rules.

We cannot allow a State Broadcaster, funded by a tax which if you don’t pay you end up in jail, to get away with such a blatant attempt to control the destiny of our Country.

Make no mistake this was Remainer led to once again discredit Brexiteers and to keep us in the EU. The BBC must not be allowed to get away with its propaganda agenda for one second longer.

For God’s sake, close it down.