A top European Central Bank (ECB) official has vowed additional stimulus in case of a slowdown in Eurozone inflation or a deterioration in economic growth, despite the concerns such measures could hurt the central bank's credibility.

Kristian Rouz – Vice President of the European Central Bank (ECB) Luis de Guindos is sounding the alarm over expectations of tame inflation in the euro area going forward, saying the central bank may enact additional stimulus to support the growth in prices at a healthy level.

De Guindos' remarks add to the recent series of statements by the ECB suggesting possible cash injections to boost economic growth in the Eurozone. 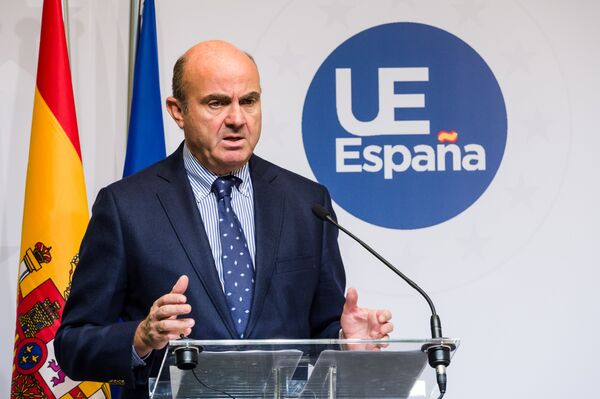 Some economists are expecting a cut to the ECB's interest rates, which would bring base borrowing costs down to below zero, while others suggest the central bank could extend its bond-buying programme known as quantitative easing (QE).

The ECB's interest rates remain at near-zero levels ranging between -0.4 percent for the central bank's deposit facility to 0.25 percent for the marginal lending facility. Meanwhile, the ECB ended its $2.9-trillion bond-buying programme last year, and has been preparing to start reducing its bond portfolio – but these plans might be put on hold or reversed.

The euro area inflation rate came in at 1.2 percent in May, well below the ECB's 2-percent target. The bloc's GDP growth rate stood at 0.4 percent quarter-on-quarter, or 1.2 percent year-on-year, in 1Q19.

ECB officials say the data remains soft and the ongoing slowdown in the German economy, along with the risks posed by a possible "no-deal" Brexit, are weighing on the Eurozone's medium-term outlook.

De Guindos says unless economic growth picks up soon, the ECB will have to intervene.

"If there is a further deterioration, then we will react." de Guindos added. "But for now, our monetary policy stance is fully compatible with both inflation and real activity."

Economists say an expansion in ECB stimulus could exacerbate some of the side-effects of such policies. For example, ultra-low central bank rates encourage excessive borrowing by households and private sector enterprises, leaving them vulnerable in the face of possible refinance operations in the event of higher interest rates down the road.

Additionally, reports last year claimed the ECB's bond-buying programme had resulted in the lion's share of commercial bonds being purchased by the central bank, limiting options for investors to diversify their portfolios.

For his part, de Guindos also said central bank policies are hardly efficient at tackling economic shocks produced by tensions in international trade. He said if more disruptions in global supply chains take place, even the deepest ECB policies stimulus might not be enough to mitigate the risk.

He also stressed the ECB's previous plan to keep interest rates at their current level until the second half of 2020 should be enough to support economic growth in the current macroeconomic environment.

Meanwhile, economists believe the Eurozone’s long-term inflation will accelerate to 1.8 percent, which is closer to the ECB target.

However, a possible decision by the ECB to cut rates into the negative territory could undermine confidence in its policy efficiency, as well as its ability to control inflation and support broader economic growth.