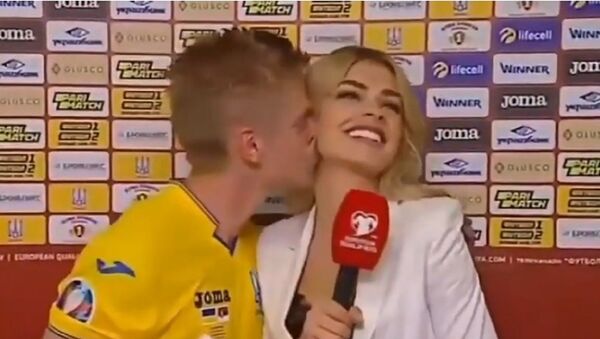 Although many expressed disgust at what seemed to be an overly affectionate gesture, some asserted that the footballer and reporter were friends and that there was nothing wrong with capturing such a demonstration of their warm relationship on camera for it to be shown nationwide.

Oleksandr Zinchenko, a Manchester City and Team Ukraine player, has made headlines by planting a solid kiss on the cheek, or rather the neck, of sports reporter Vlada Sedan during a live broadcast after his team tore the Serbian team to shreds 5-0.

Manchester’s 22-year-old full-back was used, as it turned out most successfully, in a central, untypical position during Ukraine's UEFA European Championship clash with Serbia on Friday, which was applauded as the nation’s biggest headway throughout the past several seasons.

The greatly uplifted footballer then gave a live interview to the journalist, finalising it in the aforementioned flamboyant manner, coupled with a close-up cheeky smile right into the camera lens.

While some voiced mixed feelings about the kiss, mostly claiming it was inappropriate, others pointed to the close friendship between the two, who have posed jointly for pictures on more than one occasion.

🇺🇦Zinchenko kisses a reporter during the post-match interview after Ukraine beat Serbia 5-0. That face he makes afterwards though 😭😘 pic.twitter.com/tQ1utwVliu

Well it turns out it was more of an 'sweet' Iker Casillas moment than a 'creepy' Kubrat Pulev moment...https://t.co/eVJSoGa0b8

The lady who Zinchenko kissed is Vlada Sedan (did my research) and turns out she's a lady of culture. We stan our queen pic.twitter.com/bMgEyPgyNf

The incident came after in March, a female reporter, Jennifer Ravalo, was forcefully kissed on the lips by “elated” Bulgarian boxer Kubrat Pulev after a win in a fight in California, with the woman claiming during a press conference that he had also groped her backside.

The incidents also have echoes of an interview at the 2017 French Open. At the time, French tennis player Maxime Hamou was banished from the tournament after he attempted to forcibly kiss a female reporter during a live TV interview.