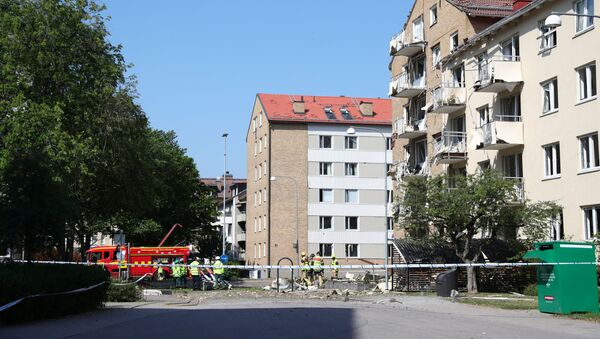 © REUTERS / TT NEWS AGENCY
Subscribe
International
India
Africa
About 20 ambulances have been alerted to the site of a major explosion in the area of an apartment block. The police suspect a "crime", but at the moment cannot rule out an accident.

A strong explosion has rocked an apartment block in the Swedish city of Linköping, the newspaper Aftonbladet reported.

The explosion occurred about 9 o'clock in the morning local time. About 20 ambulances have been summonned to the site of explosion in an apartment area at Hamngatan.

"We started to get a large number of calls from people about a heavy explosion in central Linköping, on Hamngatan. Windows have been blown away, and we are in place to secure the site. We have blocked the area and are working on getting a picture of exactly what has happened", Björn Öberg of the Linköping police told Aftonbladet.

The windows and the balconies in a five-storey house were blown off by the explosion.

"I would describe it as a limited war zone", Swedish Radio reporter Rosmari Karlsson said.

Police press officer Åsa Willsund said that at the moment there was no clear picture of what caused the blast, but that an investigation into "general dangerous destruction" has been opened.

"The way the situation is now, we suspect that this has happened through a crime, but we also cannot rule out that it is an accident that caused this, so a technical investigation on the spot will show", Willsund said.

Despite the vast damage to the house itself and the surrounding buildings, the police only reported minor personal injuries. So far, 19 victims have been taken to hospital with minor injuries.

"I was standing in the shower when I noticed that the whole house was shaking. It rumbled like thunder", witness Pontus Johansson, living in the house across the street, told the newspaper.

85-year-old Gösta Sundin, who lives on the ground floor of the house, said that he heard a huge blast at 9 o'clock.

80-year-old Hillevi Ljunggren, who has lived in the house with her husband for 30 years, is currently on holiday but was called by her son who told her that the explosion was heard about seven kilometres away, "Oh, how awful", Ljunggren reacted.

​Tweet: Explosion on Hamngatan, central Linköping. According to local newspaper @corren no dead, but several have milder injuries. The family seems unharmed. House facade after the blast.

​No properties have so far been evacuated from the restricted area, which encompasses several blocks.