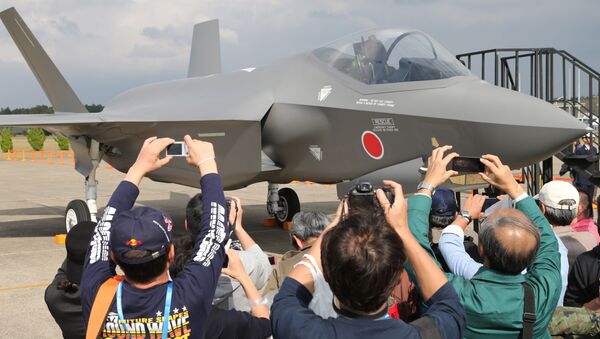 The move comes following Defence Minister Takeshi Iwaya's announcement last week that rescue teams had discovered a wing and an engine fragment from a Japanese F-35A fighter jet which had been missing since early April.

Defence Minister Takeshi Iwaya has announced the end of the search for a missing Japanese Air Self-Defence Force (JASDF) F-35A stealth aircraft which disappeared from radar screens on 9 April during a training flight from Misawa Air Force Base in Japan. The pilot's body was not found.

Iwaya added, however, that even though the search operation has been called off, rescue teams will continue to investigate the crash and that F-35A operations in northern Japan have yet to be resumed.

He also said that an underwater camera will keep monitoring an area where the plane crashed “for the purpose of protecting classified military information”.

The statement comes after he announced on 28 May that rescue teams had found the wing and an engine fragment from the missing aircraft, which “were raised to then surface and sustained serious damage”.

Back then, Iwaya pledged to continue the search because “there are still scattered fragments of the aircraft lying on the seabed”.

Fears F-35 Secrets in Danger Rise as US, Japan Yet to Track Missing Jet – Report
In April, US and Japanese search-and-rescue teams managed to find part of the plane's tail on the seabed about 80 miles (130 kilometres) from the Misawa Air Base.

The incident was the first case of an F-35A crashing, as the model, introduced in 2016, has only recently come into service in various countries.

The crash led Tokyo to ground all F-35 flights until the cause of the incident has been determined. Japan had initially ordered 42 US-made F-35 jets but recently expanded the order to include another 100 such planes.