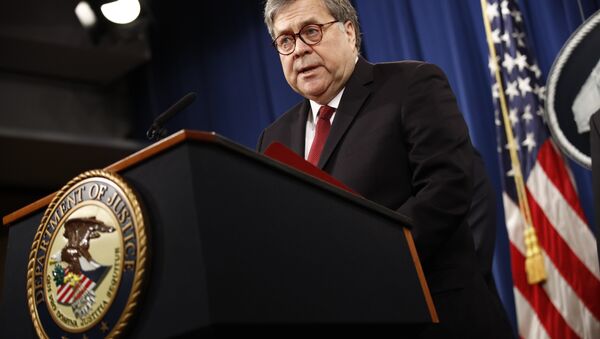 Days earlier, now former Special Counsel Robert Mueller remarked that he had never said that the president had not tried to obstruct justice, but that it was unconstitutional to charge a sitting president with a crime and unfair to accuse a person of a crime when he could not defend himself.

US Attorney General William Barr has lashed out at media in a fresh interview, accusing them of expressing no interest in finding out about the origins of the alleged Trump-Russia collusion and the respective probe, ignoring their duty as public watchdogs.

“Normally the media would be interested in letting the sunshine in and finding out what the truth is,” Barr said in an interview with CBS News. “And usually the media doesn’t care that much about protecting intelligence sources and methods. But I do and I will.”

Barr addressed the president's plans for the declassification of documents related to the surveillance activities against the Trump campaign back in 2016, after Trump granted him the authority to do so in the way he deems fit, along with ordering the heads of a number of government agencies to hand over their files to Barr.

Barr also dwelled upon the fact that the media has largely ignored the government’s surveillance activities against the Trump campaign.

“The fact that today people just seem to brush aside the idea that it is okay to you know, to engage in these activities against a political campaign is stunning to me especially when the media doesn’t seem to think that it’s worth looking into,” Barr said, adding critically that the media are expected to be guarding “our civil liberties.”

Barr said in the interview that information he has received about the origins of the Russia probe and counterintelligence activities does not correspond to former intelligence officials’ earlier public statements.

He also said that he has some doubts about the timeline of the investigation, which the FBI has claimed was opened on July 31, 2016. In trying to find out what went on during the investigation, he assumed answers would be forthcoming “when I went in and I have not gotten answers that are well, satisfactory, and in fact I probably have more questions,” Barr, who appointed US attorney John Durham to oversee a probe into the government’s surveillance against the Trump campaign, summed up.

Meanwhile, President Trump’s motion to require that various agencies including the FBI and CIA provide data that they have on their hands to Barr, prompted a barrage of criticism from former intelligence officials and some journalists.

For instance, such outlets as The New York Times, Politico, and The Washington Post published articles that quoted former intelligence officials warning that the declassification order would allow Barr to disclose the identities of confidential sources used in the Mueller probe.

The Mueller report, several pages of which having been released in April, concluded that President Donald Trump's campaign team did not collude with Russia.

Separately, the document also described 10 episodes regarding Trump's actions that may constitute possible obstruction of justice. Russia has repeatedly denied any claims of interference in the US political system whatsoever, stressing that the allegations were invented as lame excuses for the loss of Trump's 2016 opponent Hillary Clinton, as well as in order to deflect public attention from some burning domestic issues.

Robert Mueller made the first public comments on his two-year investigation on Wednesday, arguing it would be "unconstitutional" for a US president to be indicted while in office, but that's really just a Department of Justice opinion, not an established legal fact.