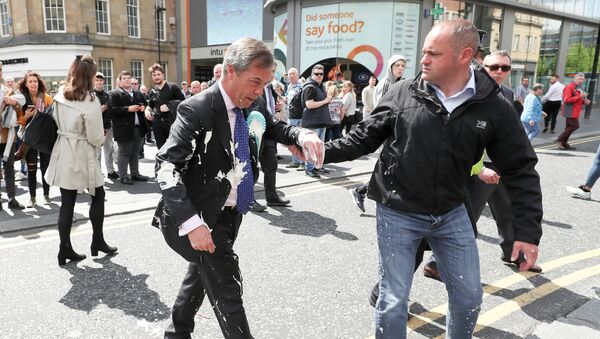 Tommy Sheridan
All materials
Having reached the ripe old age of fifty-five and been involved in political activism from the age of sixteen I am about to play the role of the boring old fart and has-been by wading into the #Milkshake phenomenon of drenching right-wing politicians with the contents of milkshake cartons on the side of caution rather than encouragement.

Make no mistake, I despise the politics of the three most recent #Milkshake targets, Nigel Fraudage, Stephen Yaxley-Lennon and the other right wing Numptie (UKIP Euro election candidate, Carl Benjamin) but I firmly believe the short-lived joy and laughter at seeing these snake-oil peddlers of hate and division humiliated, embarrassed and annoyed at having to don new clothes for their next public engagements is simply not worth the potential longer term consequences.

There is a fine and honourable tradition in most countries across the world of standing physically against fascists and their supporters who wish to use public spaces and access to public discourse to then achieve enough power to snuff out such democratic rights for everyone else.

Nigel Farage Trapped on Campaign Bus 'For Ages’ by Protesters with Milkshakes
Hitler's National Socialist Fascist Party used democracy to gain power and then crushed all opposition violently and ruthlessly before dismantling elections and democratic institutions. There is therefore a moral and political duty on all believers in democracy to verbally and physically oppose openly fascist or fascistic parties from gaining access to public spaces and utilising the right to free speech to spread hate and promote violence as they are guilty of deceit and subterfuge. They want to use free speech for themselves to then deny it to everyone else.

Those unable to learn from history are doomed to repeat the biggest mistakes. Hitler did not appear to be the inhumane monster he was until after he had used his powers of oratory, skilful manipulation of poverty and unemployment for his own ends and financial support from rich backers to secure elected office. He was named Time Magazine's "Man of the Year" in 1938 before going on to become the most ruthless mass murderer of the century, so never be fooled by mainstream media assessments of character.

So although Farage, Yaxley and UKIP may deny they are in the fascist mould of the British National Party or National Front, the reality is their anti-immigrant tirades, jingoism, xenophobia and deliberate attempts to stoke divisions, exploit fears and scapegoat those with different coloured skins and cultures are all strands of Nazi and Fascist DNA.

No More Milkshakes!
It is therefore right and proper to oppose them marching on our streets, speaking in our public halls or assembling in public spaces to spew their bile and hatred. Counter demonstrations to fascist marches and physical barricades blocking access to streets and public squares should be supported and applauded by everyone who believes in democracy and the right to free speech which does not promote and inspire physical violence.

Many argue the right to free speech is an inalienable right without conditions. That the Voltaire line of not supporting anything someone has to say but defending their right to say it should be our underlying principle:

"I do not agree with a word you say but will defend to the death your right to say it."

I disagree. Those promoting overt racist and fascist views are guilty of hate speech in my opinion. They are abusing a human right because their use of it is designed to deny that same right to others and encourage actual bodily harm on minorities and other scapegoats.

'Drink Responsibly': Burger King Denies Inciting Violence Against Nigel Farage
However political struggle conducted through persuasion, education, agitation and organisation is preferable and more effective than violent means. Politics grounded in the force of argument rather than the argument of force is bound to be more peaceful and conducive to mass participation. I am not a ‘turn the other cheek' kind of guy. If someone seriously threatens me, my family or friends I will have no qualms about defending them or myself. A blow aimed will be a blow returned in my book but therein is the quandary.

If we endorse, encourage and cheerlead milkshake attacks against right wing politicians who draws the line? What constitutes harmless fun/appropriate chastisement compared to unacceptable conduct?

Jeremy Corbyn was egged quite violently last year and the same muppets like Tony Bliar bemoaning the milkshake thrown over Fraudage were conspicuous in their silence. No condemnations or expressions of outrage were to be seen or heard. But we should not judge ourselves by the same inconsistent and hypocritical standards of Bliar and the mainstream media.

McDonald's Put Milkshakes on Hold During Farage Rally Following Police Request
The Scottish Labour leader, Jim Murphy, was ‘egged' during the Scottish independence referendum of 2014. The unionist press jumped all over it to paint independence activists as violent thugs. It was most probably a set-up involving Murphy as he appeared to be expecting it, the egg was applied quite gently and the media were well positioned to document the incident.

If it was a legitimate egging I think it was unhelpful and unnecessary. Murphy and his unionist lies should have been opposed verbally not physically.

In 2001 New Labour's Deputy Leader, John Prescott, was egged by a protestor. He reacted angrily and threw a punch at his attacker. It was only an egg so was he justified in throwing a punch? The right wing press attacked him for losing his temper but I defended his action. I opposed Prescott politically for being a puppet of Blair's New Labour Tories but I supported his reaction to being egged. Jeremy Corbyn's reaction last year was less intemperate. That's fine. We all have different temper levels. But how quickly can a milkshake or egg become a stone or bottle?

I was the egg thrower many years ago in the mid-1980's. I despised Margaret Thatcher and what she did to working class communities. I was tipped off to a secret visit she was carrying out to the Volvo factory in Irvine, on Scotland's west coast. Alongside other political activists I boarded a train to Irvine and before making our way to the factory we purchased some eggs. We hated her and resented the secretive nature of her visit.

UKIP in the Crosshairs: Sargon of Akkad Hit With THIRD Milkshake in Three Days
When we got to the factory it was cordoned off. We were kept a safe distance from Thatcher and her entourage. We all agreed to launch eggs at her as a form of protest. I was arrested by the police and held face down on the floor of a police van for over an hour before being charged and held overnight in a police cell. I was subsequently found guilty of hitting Mrs Thatcher's car roof with an egg. I was fined £50. In retrospect I regret it. No one is sure whose egg actually hit the car but I was convicted of it. In truth I now consider it a childish stunt. Political stunts have their place and can be useful in the struggle but that one was childish and futile.

The young man who was arrested in Newcastle for #Milkshaking Nigel Fraudage was motivated by good intentions. His stunt was more honourable than mine aimed at Thatcher. He has also claimed and admitted his actions with a degree of dignity:

"It's a right of protest against people like him. The bile and the racism he spouts out in this country is far more damaging than a bit of milkshake to his front".

Strawberry Slam: Tommy Robinson Gets Pelted With Milkshake in Manchester (VIDEO)
I agree with the sentiments expressed by Tom Wilkinson Crowther after he was arrested and I would contribute to a fund to help pay off any fine he may receive but he is being charged with "common assault" and if we collectively encourage and advocate one form of "common assault" we must be willing to accept that some people will feel emboldened to take things further and before we know it incidents could become much more serious. I hate being the killjoy here but I feel compelled to offer my opinion.

Defending our communities and minorities from fascist and racist bile and hatred will sometimes require physical action and responding to a physical attack with a physical defence is justified in my book but cheerleading and encouraging a "common assault" against the likes of Fraudage and Yaxley-Lennon, even though they are deceitful and vile individuals, can easily and quickly escalate and get out of hand. I urge caution.