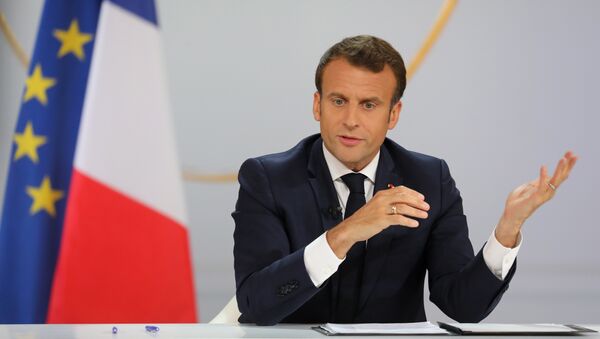 © AFP 2023 / ludovic MARIN
Subscribe
International
India
Africa
Ahead of the European Parliament elections, République en Marche, the party of French President Emmanuel Macron, has been overtaken by the right-wing National Rally, led by Marine Le Pen, his rival in 2017 presidential race, with 24 percent of the vote, according to French polls.

In an interview to Ouest France, President Emmanuel Macron has warned of an “existential risk” to the European Union ahead of upcoming elections for the European Parliament.

“I cannot be a spectator, but a participant in what is the most important European election since 1979, because the union is facing an existential risk. […] The French president isn’t the head of a party, but it’s normal that he be involved in these fundamental choices”, he said.

When asked to name the biggest enemy of Europe, Macron responded by saying that it is those who don’t believe in its future.

“The nationalists who want to divide it [Europe] are its main enemies. And I see for the first time that there’s a secret agreement between the nationalists and foreign interests, whose objective is to destroy Europe”, he said, referring to Steve Bannon, former White House chief strategist, who supported Marine Le Pen’s right-wing National Rally.

According to the French president, abstaining “means deciding to give a voice to those who would destroy Europe”.

Marine Le Pen Fires Ultimatum at Macron: 'Follow General de Gaulle's Example!'
His remarks come just a few days ahead of the European Parliament elections, scheduled for 23-26 May, and on the heels of recent opinion polls showing that his centrist party, République en Marche, is running neck-and-neck with National Rally, although Le Pen’s party holds a narrow lead over Macron’s.

Macron is not the only European politician to have spoken out against the right-wing parties: German Chancellor Angela Merkel has recently ruled out any possibility of an alliance between her centre-right European People’s Party (EPP) and any right-wing party, while speaking to Italy’s La Stampa newspaper.

Italy’s Deputy Prime Minister Matteo Salvini, who is also the head of the anti-immigration League party, quickly hit back at the German chancellor, saying that “we don’t want to stand with people who have ruined Europe for all these years”, according to media reports.

“We don’t want to have anything to do with Merkel and Macron, who have destroyed this European Union. We want to save Europe from bureaucrats, the bankers and the financiers that have ruined it all these years”, Salvini was cited as saying by local media.

In addition, Salvini and Le Pen held a joint rally on Saturday in Milan, having pledged to reshape Europe through the upcoming election.

“There are no extremists, racists or fascists in this square. Here you won’t find the far-right, but the politics of good sense. The extremists are those who have governed Europe for the past 20 years”, Salvini said.

Aside from League and National Rally, Salvini's Eurosceptic European Alliance of People and Nations also includes Alternative for Germany, The Finns Party, the Danish People's Party, Austria's Freedom Party and the Conservative People's Party of Estonia. According to Politico’s analysts, Eurosceptics currently control 256 of the 751 seats in the European Parliament.