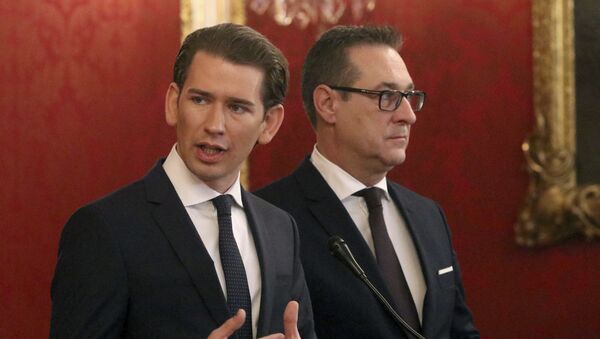 © AP Photo / Ronald Zak
Subscribe
On Friday evening, Spiegel published a video and materials dating back to July 2017, when the leader of the Austrian Freedom Party Heinz Christian Strache and his assistant Johann Gudenus met with an alleged Russian woman in Ibiza, who declared desire to invest a large amount of money in Austria.

Austrian Vice-Chancellor Heinz-Christian Strache said that he was resigning amid the video scandal, according to media reports.

"It was dumb, it was irresponsible and it was a mistake," Strache told at a news conference.

Strache said he would be replaced by Transport Minister Norbert Hofer.

"I do not in any circumstances want my wrong behaviour to provide a pretext for the government to collapse," Strache said.

Austria is likely to hold snap elections after the video released by media showing Heinz-Christian Strache allegedly promising government contracts in return for campaign funding, according to the ORF broadcaster.

Earlier in the day, Austrian Chancellor Sebastian Kurz ruled out further cooperation with Heinz-Christian Strache, according to DPA news agency, which cited its own sources.

Sebastian Kurz is expected to make a statement later on Saturday if he would call a snap election only a year and a half after the coalition was formed.

Spiegel and Suddeutsche Zeitung reported on Friday, citing the video recording that they obtained, that Heinz-Christian Strache discussed the possibility of an acquisition of the Kronen Zeitung newspaper by alleged Russian national Alyona Makarova with her in order to secure help at the legislative elections.

Austria's Kurz Blasts Fellow Politicians Over Poem Likening Migrants to Rats
According to media outlets, Strache allegedly offered this woman a secret deal and promised access to government contracts in Austria in exchange for the provision of financial assistance to his party in the October 2017 parliamentary elections.

000000
Popular comments
why all the fuss? Because they met a woman who is Russian? So if that woman would have been American, German or ukrainian than there would be no problem ?

md74
18 May 2019, 11:53 GMT3
000000
It is very obvious the woman set him up to either get him and his group removed from govt posts or to achieve other goals , if this supposedly secret meeting was recorded it could only be him or her who set up the recording , besides providing funds for a campaign in exchange for business contracts is done on a regular basis in the US not sure about Europe , in the US its widely known and practiced without raising a single brow let alone loosing your position because of it , but the absolute kicker is we in the US seriously claim our democracy is second to none pure and clean , it would be hilarious if it werent so sad that people still think politicians and lawmakers are elected by voters only
Donboston27
18 May 2019, 16:03 GMT1
000000
Newsfeed
0
New firstOld first
loader
LIVE
Заголовок открываемого материала
Access to the chat has been blocked for violating the rules . You will be able to participate again through:∞. If you do not agree with the blocking, please use the feedback form
The discussion is closed. You can participate in the discussion within 24 hours after the publication of the article.
To participate in the discussion
log in or register
loader
Chats
Заголовок открываемого материала
Worldwide
InternationalEnglishEnglishMundoEspañolSpanish
Europe
DeutschlandDeutschGermanFranceFrançaisFrenchΕλλάδαΕλληνικάGreekItaliaItalianoItalianČeská republikaČeštinaCzechPolskaPolskiPolishСрбиjаСрпскиSerbianLatvijaLatviešuLatvianLietuvaLietuviųLithuanianMoldovaMoldoveneascăMoldavianБеларусьБеларускiBelarusian
Transcaucasia
ԱրմենիաՀայերենArmenianАҧсныАҧсышәалаAbkhazХуссар ИрыстонИронауОssetianსაქართველოქართულიGeorgianAzərbaycanАzərbaycancaAzerbaijani
Middle East
Sputnik عربيArabicArabicTürkiyeTürkçeTurkishSputnik ایرانPersianPersianSputnik افغانستانDariDari
Central Asia
ҚазақстанҚазақ тіліKazakhКыргызстанКыргызчаKyrgyzOʻzbekistonЎзбекчаUzbekТоҷикистонТоҷикӣTajik
East & Southeast Asia
Việt NamTiếng ViệtVietnamese日本日本語Japanese俄罗斯卫星通讯社中文（简体）Chinese (simplified)俄罗斯卫星通讯社中文（繁体）Chinese (traditional)
South America
BrasilPortuguêsPortuguese
NewsfeedBreaking
08:55 GMTPutin Offers Deep Condolences to Relatives of Perm University Shooting Victims, Kremlin Says
08:39 GMTAustralia Trade Minister Looks Forward to Meeting With French Colleagues Amid Sub Deal Row
08:38 GMTVolcano Eruption on Spanish Island of La Palma Forcing Evacuations
08:06 GMTMen Sleep Worse During Waxing Moon, Women Unaffected – Study
07:58 GMTEmmy Awards 2021: Big Winners, 'Hollywood's Most Hated Man' and #SoWhite Controversy
07:30 GMTIndia: Uproar Over Arrest of BJP's Kirit Somaiya in Maharashtra For Accusing Minister of Corruption
07:10 GMTFinnish PM Embroiled in Product Placement Controversy Over Instagram Story
07:05 GMTEight Killed as Gunman Goes on a Shooting Spree at Russia's Perm University
06:27 GMTCanada Set to Deliver Verdict in Testy Vote as PM’s Cakewalk Becomes Nail-Biter
06:17 GMTTaliban Order Women Working in Kabul to Stay at Home, Interim Mayor Says
06:12 GMTSweden Raises Taxes to Finance Largest Military Investment in Modern Times
06:01 GMTBoJo Vows UK’s ‘Ineradicable’ Love of France in Bid to Mend Fences Amid Diplomatic Row Over AUKUS
06:00 GMTBritain Considers Offering Loans to Energy Firms Amid Dramatic Hike in Gas Prices - Report
05:29 GMTRussia’s Ruling Party Ahead in Parliamentary Vote With Over 48%, Election Commission Says
04:34 GMTLive Updates: UK PM Johnson to Push Joe Biden to Lift COVID-19 Travel Ban With US
04:30 GMTNot in the Mood: Golden Retriever Does Not Want to Cuddle
04:28 GMTChinese Observers Give Positive Assessment of Russian State Duma Election
03:45 GMTMusk Adds Another Joke to Joe Biden’s ‘Sleepy’ Issue, When Asked About ‘Inspiration4’ Flight
03:16 GMTKhamenei Appoints New Head of Iranian Air Force
03:16 GMTWait, Again? New Photo of Trudeau Wearing Blackface Emerges on Social Media