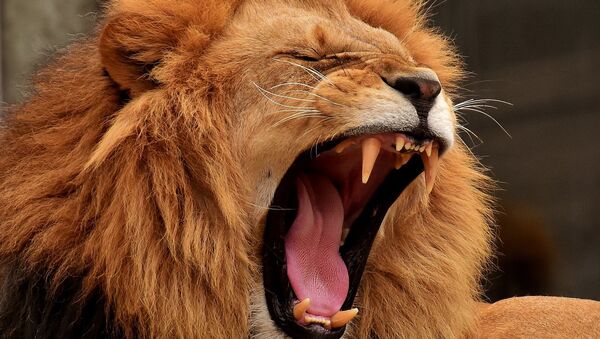 CC0 / /
Subscribe
Illegal public intrusion into lions’ territories seems to be on the rise in India’s protected Gir Wildlife Sanctuary, which was established in 1965 to protect Asiatic lions. Forest officials say efforts are on to aggressively crackdown on illegal activities in the protected forest areas of the region.

New Delhi (Sputnik) — A video clip of two men in an Indian wildlife sanctuary luring an Asiatic lion out of the bushes with bait tied to a motorbike is gaining traction on social media.

The video clip, recorded in the Amreli district of the Indian state of Gujarat, shows one of the men driving a motorbike and driving away with the carcass of an animal tied to it. The second person is seen running away and is joined by another man. Others seem to be cheering the lion sighting. The lion was resting in the bushes, but the two men were successful in luring it out on to the road in a forested area.

"We will take strict action against all offenders involved and whosoever is guilty will be punished as per law", said the officer.

"Whenever such incidents happen, we act promptly. Last week, we nabbed six persons in the Junagadh forest division and previous to that, another six were taken into custody in the Gir East Forest Division", the officer added.

Illegal lion sightings are rampant in Gujarat's protected Gir Wildlife Sanctuary. The sanctuary is spread over a total area of 1,411 sq. km, of which 258 sq. km. is fully protected as a national park and 1,153 sq. km. is a wildlife sanctuary.

This is not an isolated incident, as last year a video luring a lioness to grab a chicken in Junagadh district surfaced.