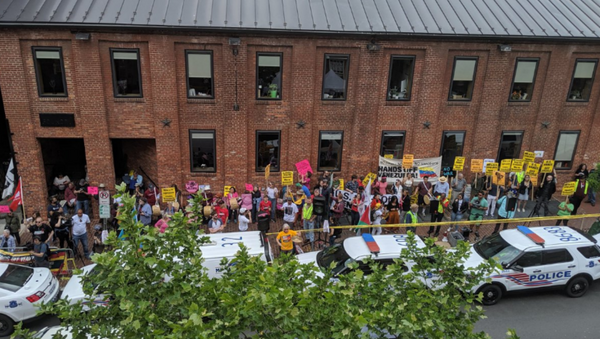 Members of the Embassy Protection Collective, who are part of a movement based in the Venezuelan Embassy in Washington, DC, released a final statement on Monday moments before US law enforcement officials raided the building in violation of international law.

"We are expecting the police to come in and violate the Vienna Convention with their fictional government claiming that we should leave. It is an unlawful order," Kevin Zeese, a member of the Embassy Protection Collective, said in a statement on Twitter.

"We are prepared to be arrested. We're not going to leave voluntarily. We came here to protect the embassy," he added.

​The collective's final statement came moments after authorities taped a "trespassing notice" on the building.

​The Embassy Protection Collective movement, led by anti-war organizations including Code Pink, Popular Resistance and the ANSWER Coalition, opposes the US-sponsored coup against Venezuelan President Nicolás Maduro and has been protecting the Venezuelan Embassy in Washington, DC, for 34 days.

Activists inside the embassy have been supporting the government of Maduro after Venezuelan diplomats working in the building were ordered by the US State Department to leave the country by April 25. However, the activists have been in a constant standoff with supporters of Venezuelan opposition leader Juan Guaido and his appointed ambassador to the US, Carlos Vecchio.

​In a written statement to the US State Department and the Venezuelan Foreign Ministry on Monday, the Embassy Protection Collective reiterated that it is in the embassy lawfully, also noting that being illegally evicted by police violates the Vienna Convention on Diplomatic Relations, which states that diplomatic premises must be protected against any "intrusion, disturbance of the peace or impairment of its dignity."

"The Embassy Protectors will not barricade ourselves, or hide in the embassy in the event of an unlawful entry by police. We will gather together and peacefully assert our rights to remain in the building and uphold international law," the statement states.

"Any order to vacate based on a request by coup conspirators that lack governing authority will not be a lawful order. The coup has failed multiple times in Venezuela. The elected government is recognized by the Venezuelan courts under Venezuelan law and by the United Nations under international law. An order by the US-appointed coup plotters would not be legal," the statement adds.