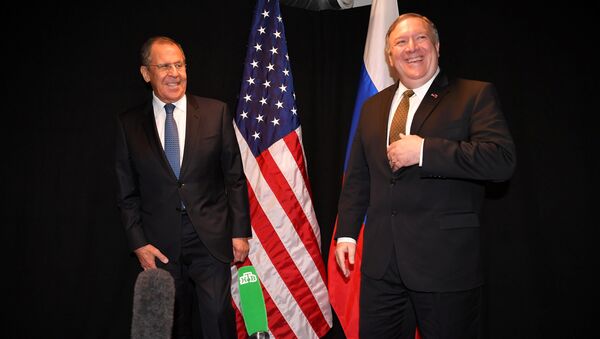 © REUTERS / Mandel Ngan/Pool
Subscribe
International
India
Africa
Secretary of State Mike Pompeo has started a four-nation trip to Europe for talks with European and Russian counterparts on issues ranging from Arctic security to the crisis in Venezuela.

There is no possibility of any type of military intervention in Venezuela, Russian Foreign Minister Sergei Lavrov said Monday.

"We are against hostilities anywhere in violation of international law, the use of force may only be authorized by the UN Security Council, or force may be used in response to aggression against a sovereign state. Nothing of the kind is observed in Venezuela in any variants," Lavrov said after talks with US Secretary of State Mike Pompeo in the Finnish city of Rovaniemi.

Lavrov's speech comes after his talks with Secretary of State Mike Pompeo earlier in the day. The two senior officials had second face-to-face talks on the sidelines of the meeting of the Arctic Council.

Pompeo arrived on Monday in Rovaniemi, Finland, to participate in a ministerial meeting of the Arctic Council and deliver a major speech on US policy in the region.