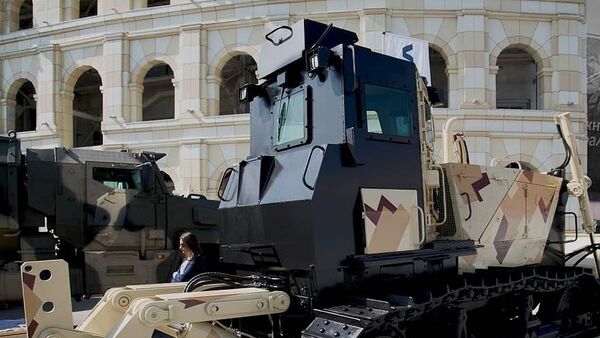 © Photo : Rosrec // Instagram
Subscribe
The newest addition to the Russian Army will allow it to reduce minefield clearance costs, while at the same time increasing the capabilities of mine removal vehicles.

Russia's state-owned tech company Rostec has revealed on its Instagram the newest addition to the country's military — an armoured tractor fit for clearing minefields. Production of the vehicle is scheduled to start in 2019.

According to Rostec, the minesweeping tractor is way more manoeuverable and more durable than regular tanks equipped with a mine plough while, at the same time, being cheaper to produce.

The fact that it's less expensive, doesn't mean decreased protective capbilities. The engineers at the Chelyabinsk Tractor Factory designed their mine removal vehicle to withstand a blast from the explosive device if the tractor runs into one, even if the device is more powerful than a regular mine.

The tractor will be operated by human personnel, unlike the planned modification of the T-90MC battle tank. Russia's Uralvagonzavod is considering turning the vehicle into an unmanned one, noting that the tank's systems have evolved so much that the T-90 is only one step from making a human crew an unnecessary addition.

000000
Popular comments
Hopefully in the future we won't need equipment like this.
Shadowlady8
5 May 2019, 17:03 GMT3
000000
Shadowlady8, there still are millions of mines worldwide laid in conflicts even dating back to WW2. Tens of thousands lose limbs if not their lives every year around the world long after the conflict ceased. The UN should order at least 500 of these essential anti mine tractors.