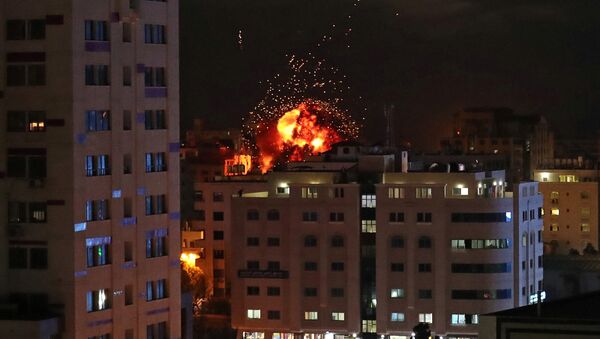 Earlier, the Israeli Defence Forces said that its tanks and aircraft had targeted 30 areas inside the Gaza Strip in response to 200 rocket launches from the territory on settlements in southern Israel earlier in the day.

Israeli Air Force fighters are "continuing to strike at terrorist targets in the Gaza Strip," carrying out attacks on "about 70" targets in the territory, the Israeli military has said in a communique released Saturday evening.

According to the IDF, warplanes destroyed a 20-meter deep 'attack tunnel' created by the Palestinian Islamic Jihad organisation, which had been dug under the Gaza-Israel border into Israeli territory and was intended to allow militants to carry out attacks.

The IDF reportedly surveiled the elaborately built tunnel, which included several entrances and exits, before its destruction Saturday.

VIDEO of Gaza Skyline Following IDF Attacks on Terrorist Targets
An IDF spokesman accused the PIJ of working to destabilise the Gaza Strip in recent weeks, noting that "in practice, we see that Hamas is not succeeding in enforcing its rule on the PIJ."

The IDF reported intercepting dozens of rockets launched from the Gaza Strip earlier Saturday with its Iron Dome defence network, saying that several of the rockets made it through, with rocket fire hitting at least one house.

200+ rockets rained down on the homes of Israeli families today. WATCH: pic.twitter.com/XZoqPabuQ6

The Israeli military response included targeting multiple launch sites, military compounds, and locations allegedly used to train militants and for the manufacture of weapons, with the strikes targeting Hamas, which governs the Gaza Strip, and its PIJ ally.

Two Israeli civilians were reported injured in the rocket attack, with one Palestinian killed and four others wounded in Gaza, according to the Health Ministry.

The escalation of tensions between Israel and Hamas follows violent confrontations Friday along the border area in which four Palestinians were killed and 51 wounded, with two Israeli troops also receiving injuries.