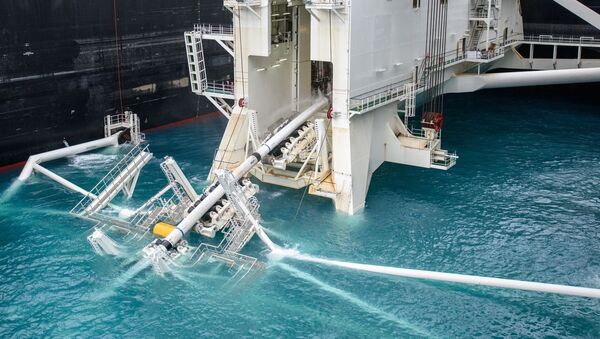 © Photo : turkstream.info
Subscribe
International
India
Africa
BRUSSELS (Sputnik) - Budapest is interested in considering alternative gas supply routes from the south, given the uncertainty surrounding the future of Russian gas transit via Ukraine in light of the nearing expiry of the relevant contract between Moscow and Kiev, the Hungarian foreign minister said.

Hungarian Foreign Minister Peter Szijjarto's statement was made on Thursday in an apparent reference to the TurkStream pipeline that will carry Russian natural gas via the Black Sea at a panel discussion at the EU-US first high-Level Business-to-Business Energy Forum in Brussels; the event was devoted to the issue of the United States’ LNG supplies, something that Washington promotes as an alternative to natural gas deliveries from Russia.

Speaking at the forum, Szijjarto said that Hungary imported gas from Russia due to the infrastructure conditions. He noted that, given the unresolved issue of the future Russian gas transit via Ukraine, Hungary should consider alternative supply routes from the south.

The minister added that Hungary's friends and allies were urging Hungary to diversify its gas imports, noting that Budapest was not against that idea but believed that success in diversification much depended on the country’s allies.

US Targets Huawei, TurkStream, Threatening EU's Sovereignty - Economist
The trilateral talks between Russia, Ukraine and the European Commission on the future of gas transit via Ukraine started in mid-July 2018. The second round of the negotiations concluded without an agreement in late January 2019. The current contract regulating the transit of the Russian gas through Ukraine between Russian giant Gazprom and Ukraine’s Naftogaz expires on 31 December 2019.

Russian gas giant Gazprom CEO Alexey Miller and Szijjarto signed back in 2017 a roadmap for the development of the Hungarian gas transportation system. Serbian Foreign Minister Ivica Dacic expressed hope in April that the work on the Serbian section of the TurkStream gas pipeline, which will help transport Russian gas from Bulgaria to Hungary, would be completed by the end of 2019.

The TurkStream twin-pipeline will have a maximum capacity of 31.5 billion cubic meters (1.1 trillion cubic feet) a year. The first leg will deliver Russian gas under the Black Sea to Turkey for local consumption by 1 January 2020. The second leg is expected to carry gas to Southern and Central Europe, but its route has not been determined yet.