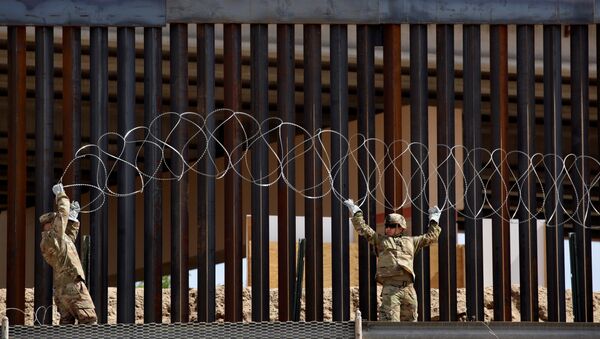 © REUTERS / Jose Luis Gonzalez
Subscribe
The situation on the US-Mexico border has been tense for several months, since thousands of migrants started arriving at the frontier, trying to enter US territory.

The White House said in a statement that US President Donald Trump has ordered his administration to charge fees for asylum claims and handle cases within 180 days.

Trump has signed a presidential memorandum to provide access to asylum for legal asylum seekers, while more effectively tracking and expelling illegal migrants who do not meet the criteria and do not meet the requirements, the statement said.

"The purpose of this memorandum is to strengthen asylum procedures to safeguard our system against rampant abuse of our asylum process", the US president noted in the memo.

US to Send 320 More Personnel to Border with Mexico

The US Department of Defence, meanwhile, has announced that it will deploy an additional 320 military personnel to the country's southern border with Mexico.

The move will cost about $7.4 million, according to the Defence Department.

At present, approximately 3,000 soldiers are deployed at the border.

An increasing number of migrants have been arriving at the US border from Central America in recent months. According US Customs and Border Protection statistics, some 103,000 migrants were apprehended on the southern border for illegal entry into the United States in the month of March.

Trump Warns Mexico Against ‘Pulling Guns’ on US Troops, Sends Forces to Border
Last fall, a migrant caravan, including thousands of people from Central America, attempted to cross into the United States through its border with Mexico. US border guards repelled the migrants by using tear gas against then. Additional US troops have been deployed to the border area in order to counter the attempted migrant invasion.