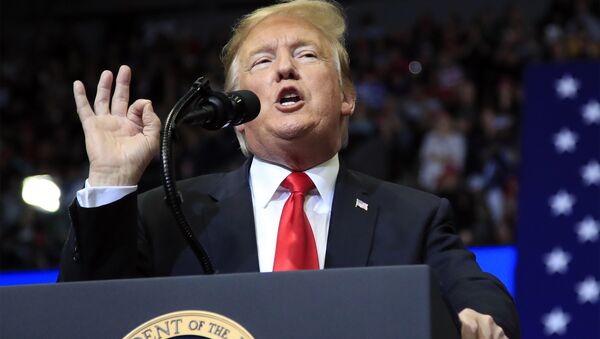 A lot of the time if the US president is not going to brag about it, no one else is, Trump said during a campaign rally in Wisconsin.

Speaking at his campaign rally in Green Bay, Wisconsin, on Saturday, US President Trump claimed he has been called the "greatest hostage negotiator this country has ever had".

A day before, Trump posted a tweet saying a "Cheif [sic] Hostage Negotiator!" called him the "greatest hostage negotiator" in US history.

“President Donald J. Trump is the greatest hostage negotiator that I know of in the history of the United States. 20 hostages, many in impossible circumstances, have been released in last two years. No money was paid.” Cheif Hostage Negotiator, USA!

​"20 hostages, many in impossible circumstances, have been released over the last two years. No money was paid", Trump tweeted what he said was a quote.

‘End of Life Care’: Gitmo Might Turn Into Rest Home as Prisoners Aging - Report
According to White House spokeswoman Sarah Huckabee Sanders, the quote belongs to Robert C. O'Brien, US special presidential envoy for hostage affairs at the US Department of State.

"So, our ambassador made the statement and the press picked it up and they were going after me, ‘It's not true,' ‘It's not true'", Trump continued. "And then he called them and he said, ‘No, it is true'".

"And instead of saying, ‘It's true,' they stopped talking about it", Trump said, referring to the media. "Fake news", he concluded.

During its time in the White House, the Trump administration has secured the release of 20 US nationals taken hostage in various parts of the world, including Afghanistan and North Korea, according to a CNN report.

Iran’s FM Zarif Says US Must ‘Prove It’s Serious’ About Prisoner Swap Talks
Trump also lauded himself for recognising the disputed region of the Golan Heights as a part of Israel. According to Trump, he ended a 52-year process of meetings and discussions on the issue.

"So that's been under consideration for 52 years, for 52 years they told me they'd been studying it", Trump said. "This is very important strategically for victory — heights, because you're up high — very important. Fifty-two years ago this started and I did it quickly. Done. It's all done".

Israel captured the Golan Heights from Syria during the 1967 Six-Day War and annexed the territory in 1981, a move that was not formally recognised by the UN and — until recently — the US.

Israel welcomed the proclamation, while Syria condemned it, calling it a "blatant attack on Syria's sovereignty and territorial integrity".