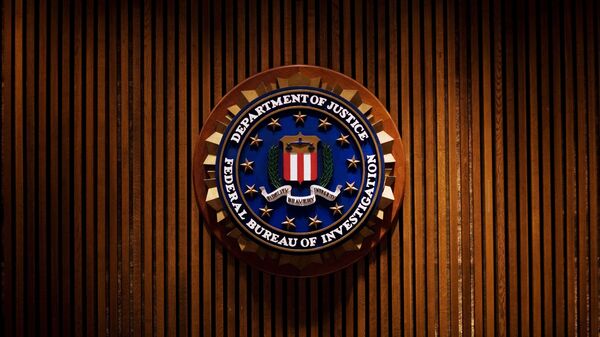 "I do think that Russia poses a very significant counterintelligence threat, certainly in the cyber arena, certainly what we call the 'malign influence' territory, certainly in their presence of intelligence officers in this country, so in a lot of ways," Wray said in response to a question about Special Counsel Robert Mueller’s probe into allegations of Russian interference in the 2016 US presidential elections.

World
US Threatens to Counter Russia in 'Western Hemisphere' Amid Venezuela Row
Wray characterised Russia’s alleged influence in the 2016 US elections as an "aggressive campaign" that has since continued on various social platforms and aims to divide Americans and undermine their faith in democracy.

Wray also said the campaign continued full speed in the 2018 mid-term elections, but pointed out what the FBI "did not see in 2018 was any material impact or interference with election infrastructure or campaign infrastructure."

Mueller’s report concluded that Russia interfered in the 2016 US election in systemic manner in favor of then-candidate Donald Trump. However, the report also said that there was no collusion between Russia and the Trump campaign.

On Russia's GRU Officers Under Indictment

The Federal Bureau of Investigation has been more aggressive in calling out the actions of Russia’s GRU and hopes to see indicted foreign intelligence officers imprisoned, FBI Director Christopher Wray said on Friday.

"Some people sometimes question whether it makes sense to charge and indict foreign intelligence officers," Wray said in remarks at the Council of Foreign Relations in Washington. "I actually happen to believe that it makes sense because sometimes in foreign intelligence arena when you get into questions of attribution, I am tempted to say nothing says attribution more than an indictment."

The United States in October filed charges against seven alleged Russian military intelligence officers for taking part in what it says was a conspiracy to hack US, Canadian and international organizations, according to the Justice Department.

Wray said foreign intelligence officers’ ability to operate and travel becomes restricted once they are indicted.

"The FBI has a long memory and a broad reach, and I would not be surprised if we see some of these people in orange jumpsuits one day," he said, in a reference to the orange uniforms of prison inmates.

The FBI is so confident that is right in the cases of indicted foreign military officers that is willing to risk having them come to the United States to face a trial by jury, Wray said.

He added that the FBI has taken a number of steps to be more aggressive in calling out GRU actors for what he said were the more brazen actions around the world.

"For example, we charged a number of GRU officers for their role in an extensive hacking campaign to undermine in an international anti-doping arena," Wray said.

Claims About Alleged GRU Cyberattack on UK-Based TV Inconsistent - Embassy
The seven Russian military officers under indictment allegedly targeted a nuclear power company in the US state of Pennsylvania, multiple anti-doping agencies and athletes, according to the Justice Department. The company, Westinghouse, based in Pittsburgh, supplied nuclear fuel to Ukraine, Attorney for the Western District of Pennsylvania Scott Brady said in October.

The Justice Department said at least 250 athletes from 30 different countries were also targeted, as well as multiple anti-doping agencies in the United States, Canada and internationally and the Organization for the Prohibition of Chemical Weapons (OPCW).