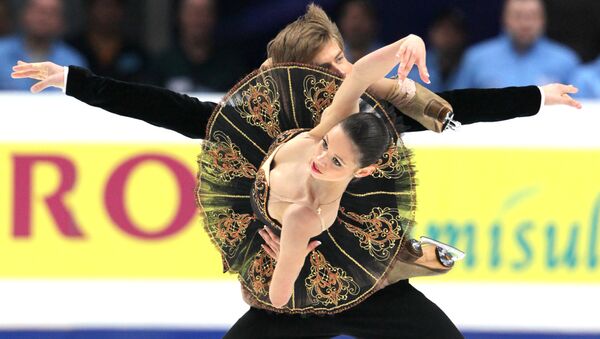 The 2014 Olympic ice dancing champion announced her decision to end her skating career this week, only to reverse it later the same day.

Elena Ilinykh, the Russian Olympic skating champion, dubbed by some as ‘Russia's most beautiful skater,' debunked rumors of her retirement Tuesday.

Speaking in an interview with Russian Sport Express website, the 24-year-old 2014 Winter Olympics winner underscored she has no intention to end her career, despite having been out of competition for two years.

"I can't officially say that I've finished my career or that I will continue right now," she said. "I have a great wish to skate, but there are circumstances which do not allow me to simply continue right away."

"I can say I'm crazy in love with skating, and it's impossible to say I'm done with it. I'll be skating even when I'm 50!" she added.

Ilinykh had performed in a pair with Nikita Katsalapov beginning in 2008. However, in 2014, Katsalapov publicly announced his decision to split with his long-time partner. Between 2014 and 2017, Ilinykh skated with Ruslan Zhiganshin.

Since 2017, Ilinykh has not been in the public eye.

"Right now I'm working on various projects, and my life changed a bit because of certain circumstances. Unfortunately, I had to end skating. It was not my decision," she told Sport Express.

Earlier this week, several news outlets reported Ilinykh had announced her decision to end her sports career. When asked whether she is preparing for the next season, the skater said, "Sadly, no."

"I've finished [my] skater career. Right now Yulia Lipnitskaya and I are working on the academy, giving master classes around the world," the skater said, referring to another Olympic champion skater and their joint venture, the "Ilinykh-Lipnitskaya Champion Academy."

However, the Olympic champion promptly debunked her own words the same day, puzzling both fans and the media.

"I am so much in love with skating it is too early to say I'm parting ways with it," she said. "I've never discussed the end of career issue officially with anyone."

Ilinykh was dubbed "Russia's most beautiful skater" by Championat.com, which published their own ranking of the most beautiful skaters of 2015 Shanghai World Championship; since then, many news websites have reiterated the informal title, and we are not going to challenge it.