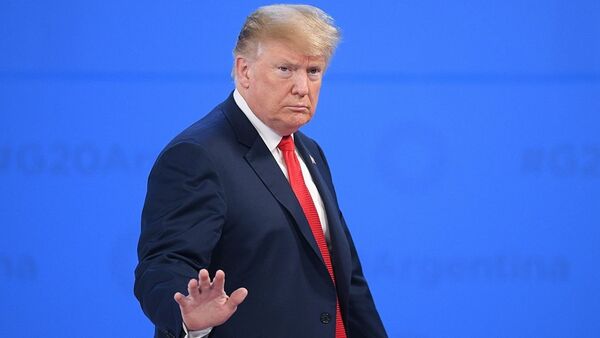 The US president is set to visit the UK on 3-5 June for an official state visit, following his working visit last year.

Donald Trump has accused UK spying agencies of monitoring him at the behest of the Obama administration, quoting a story to that effect published by independent media outlet One America News Network on Twitter.

The allegations were made by Former CIA analyst Larry Johnson, who left the Agency almost 30 years ago — he's made numerous controversial claims over the years, including spreading a hoax in 2008 that Michelle Obama had been videod issuing slurs against white people, and claiming in 2013 leading Democrat John Kerry was guilty of war crimes in Vietnam. He also said al-Qaeda chief Osama Bin Laden wasn't a threat two months before 9/11 attack.

​The claims are nothing new and date back to the earliest days of Trump's presidency — in a March 2017 White House press conference, then-presidential spokesperson Sean Spicer said that the Cheltenham-based eavesdropping agency had colluded with the former POTUS.

It sparked a diplomatic incident between the two countries, prompting GCHQ bosses to make a rare public statement labelling the claims "utterly ridiculous", and Trump's then-National Security Advisor H.R. McMaster to contact his colleague in No. 10 to personally apologise. McMaster also gave assurances that America would never repeat the embarrassment. Spicer also apologised.

Secret Location of British GCHQ Spy Hub During 2012 Olympics Revealed
"As we have previously stated, the allegations that GCHQ was asked to conduct 'wire tapping' against the then President Elect are nonsense. They are utterly ridiculous and should be ignored", GCHQ said in response to the latest allegations.

The president and First Lady Melania will visit the UK on 3-5 June, in the run up to D-Day anniversary commemorations — but refurbishment work at Buckingham Palace means the president will have to stay elsewhere during his visit, unlike former presidential visitors.

Trump is a long-time fan of the British monarchy, but it's not the first time his regal ambitions have been spurned. For instance, he sent Princess Diana a bouquet of flowers at one point in the 1990s, and claimed he could've "nailed her" in an interview conducted not long after her death in September 1997 — although nothing romantic came to pass between the pair.

He also invited Diana's former husband, Prince Charles, to his wedding with Melania, but he declined the offer.