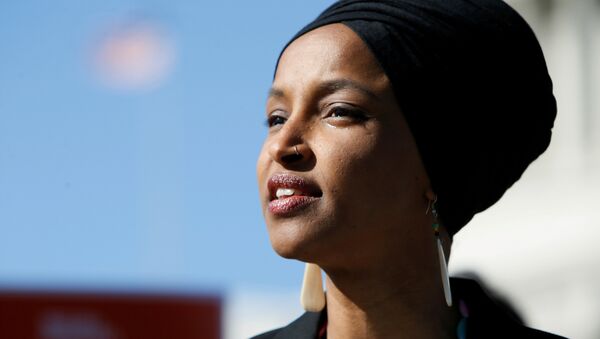 A recently released Federal Election Commission report suggests that Omar, who managed to raise over $800,000 in the first quarter of 2019, is now one of the Democratic Party's top fundraisers, despite being grilled over her allegedly anti-Semitic remarks and controversial statement on 9/11.

Two US Democratic politicians have recently returned contributions given to their respective campaigns by Rep. Ilhan Omar, the Daily Caller reports.

According to the media outlet, each of the candidates – Rep. Lucy McBath from Georgia’s 6th district and Dan McCready, who is currently vying for North Carolina’s 9th district – rejected a $2,000 donation made by Omar, with McCready reportedly arguing that "there is no place for divisiveness in politics".

NEW: Dan McCready has refunded a $2000 donation from Rep. Ilhan Omar. A spokesperson for McCready tells me Dan believes there is no place for divisiveness in politics and he didn't feel it was appropriate to accept the donation #NC09 #ncpol @wsoctv

​Earlier this week, Politico reported citing a Federal Election Commission report that Omar managed to raise around $832,000, largely from online donors, which effectively “puts her among House Democrats’ top fundraisers in the first quarter”.

'She Owes Us an Apology': Father of 9/11 Victim Blasts Ilhan Omar, NY Democrats
Ilhan Omar has found herself facing severe backlash on a number of occasions over her controversial remarks. Earlier, she suggested that Jewish organisations pay US politicians to support Israel, with many considering this remark to be anti-Semitic.

Last week, she was also thrust into the spotlight after US President Donald Trump tweeted a video featuring her describing the 9/11 terrorist attacks as “some people did something”, with the congresswoman later complaining that she "experienced an increase in direct threats” on her life as a result.

Ilhan’s statements elicited a mixed reaction among her fellow party members. While US Democratic Congresswoman Alexandria Ocasio-Cortez continued to defend her, Democrats in Minnesota, the state she represents, reportedly considered challenging Omar in the 2020 election.