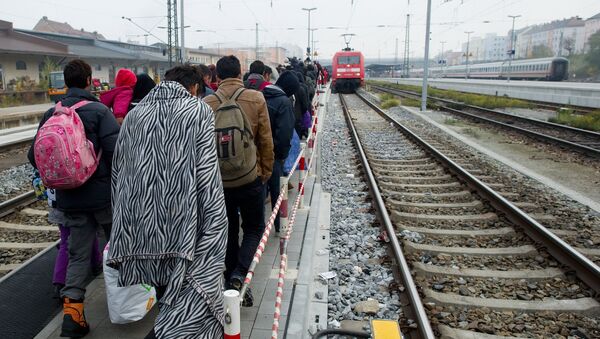 German Interior Minister Horst Seehofer has presented a plan featuring rules to facilitate the deportation of failed asylum seekers, with the measures targeting people who have exhausted all legal avenues to obtain asylum.

However, there is no unanimity on the plan among the German states, since not all approve of asylum seekers marked for deportation being held in state jails rather than pre-deportation holding facilities.

Last year, Germany deported about 25,000 people. This represents just over a tenth of the total number of people ordered to leave the country.
Seehofer’s  plan contains a series of contentious proposals including an increase to nearly 1,000 pre-deportation cells in regular jails – something that regional ministers say breaches the tenet that deportees be kept separate from convicted criminals.

Other proposals include "collaborative detention" over 14 days to force potential deportees who "disguise" their identities to visit consulates of their presumed home countries to complete departure formalities, a new borderline category of "tolerated stays for persons with undetermined identities" that could ban job seeking and impose restrictions on migrants where they live, and reductions in social welfare grants for asylum seekers already granted asylum in other EU states.

Last year, Horst Seehofer triggered heated debates over Germany’s refugee policy with his 'Migration Masterplan', aimed at tightening migration rules and promised another  crusade in 2019 to prevent asylum seekers whose applications had been rejected from illegally staying in Germany.

"If someone is to be deported, we should take him into custody, so that he does not disappear by the time of deportation", the politician, known for his hardline stance on migration policy, said.

Seehofer’s initial Masterplan for a stricter refugee policy was strongly opposed by Angela Merkel, her Christian Democratic Union and its Social Democrat SPD coalition partners.
The proposal to turn away refugees registered in other EU countries had brought the long-time CDU/CSU alliance to the verge of collapse, with this scenario averted as the coalition partners, Merkel's CDU and the SPD, managed to reach common ground on migration issues by agreeing to turn down certain asylum-seekers on the basis of bilateral agreements with other EU countries.

Since the “open borders policy” was announced in 2015, Germany has accepted more than 1 million migrants from the Middle East and Northern Africa; Merkel's government has been criticised for failing to effectively handle the migrant influx.

Seehofer’s new package of tough measures sparked a mixed reaction, with criticism from Pro Asyl [Pro Asylum], a Frankfurt-based alliance of church and secular groups, which said the plan was focused on "deprivation, increased detentions, and the forced eviction of refugees from Germany by withholding welfare assistance".

The right-wing Alternative for Germany (AfD), claimed the government was "hindering deportations".

Opposition Left Party co-leader Bernd Riexinger accused Seehofer of acting like a "Wild West Sheriff," setting false priorities at a time when his ministry should be seeking answers to Germany's rental housing and apartment crisis.

The Greens' Filiz Polat described the draft legislation as "one-sided, saying it was "highly questionable" in terms of its constitutionality, and "noxious" in relation to Germany's integration efforts.

The Orderly Return Bill could pass before the summer recess, as it now goes to parliament for debate.

000000
Popular comments
Much bla bla bla but less than a tenth of the millions of frauding asylum demanders will be removed. Most of the also invading tenth up to a third million experienced murder mercinaries will stay, as an important mortal force of the ruling finance pharisee in New York which can on sneak instigation destroy Germany worse than Syria. 3w point Anstand point AG/281 , ...../171a
GoldMorgs
18 April 2019, 13:49 GMT
000000
Basically a good idea,but perhaps it's too little too late ?! The main damage by uncontrolled migration to Germany has already been done