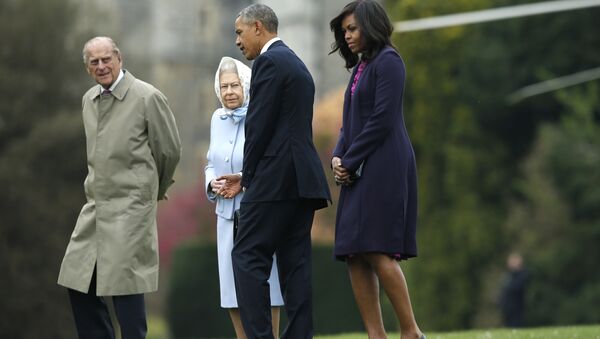 Commenting on her conduct during a previous meeting with the monarch, Michelle Obama argued that it was “the human thing to do”.

Confronted with questions about her previous meeting with Queen Elizabeth II, former First Lady of the United States Michelle Obama offered what the Daily Express described as a "provocative reply" when asked if she would’ve done things differently – a reference to her allegedly breaking protocol by putting her arm around Her Majesty.

Twitter Fumes as Roseanne Barr Blames Michelle Obama for Her Sack From ABC
According to the newspaper, the former FLOTUS explained that while there are people who handle protocol for the world leaders, "usually the people they're representing don't want all that protocol".

"So you wonder well who are you doing this for because they don't want it, we don't want it. But it's just the way things are. So I don't know that I could have done anything differently because it was a natural human reaction", she said.

The former first lady also remarked that her conduct back then “was absolutely the right thing to do, because it was the human thing to do”.

The newspaper noted that Her Majesty apparently isn’t “one for royal protocol either”, referring to an episode featured in Michelle Obama’s new autobiography.

"We were briefed on the protocol ahead of time: We’d greet the Royals formally before getting into their vehicle to make the short drive. I’d sit in the front next to ninety-four-year-old Prince Philip, who would drive, and Barack would sit next to the Queen in the back seat", the ex-FLOTUS wrote.

However, upon their arrival to the palace grounds the Queen "abruptly threw a wrench into everything" by inviting Michelle to join her in the back seat of a Range Rover instead.

"I froze, trying to remember if anyone had prepared me for this scenario, whether it was more polite to go along with it or to insist that Barack take his proper seat by her side. The Queen immediately picked up on my hesitations and was having none of it. ‘Did they give you some rule about this?’ she said, dismissing all the fuss with a wave of her hand", Michelle stated.